I feel guilty. The New York Times is running a marathon look at arbitration and other forms of private justice, and I haven’t highlighted any of it even though it’s long been one of my pet issues. Big corporations increasingly insist on private arbitration if customers have complaints, and this is happening at the same time the Supreme Court is making it harder and harder to file class-action suits. The upshot is that big corporations can still sue each other (you can bet they don’t accept arbitration clauses when they sign deals) and ordinary people can sue other ordinary people. But when it comes to ordinary people suing big corporations, good luck. Increasingly, you can’t sue them yourself, and law firms can’t initiate class actions. Your only option is to go before an arbitrator who depends for her living on 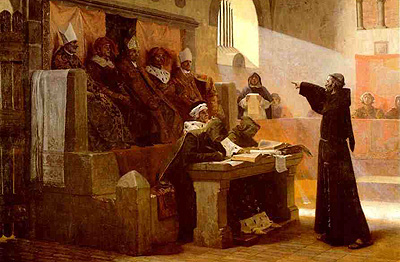 getting lots of corporate business. Good luck getting a fair hearing.

Today brings Part 3 of the series, and it’s all about the creeping imposition of sharia law in arbitration hearings. No, wait. That’s not it:

For generations, religious tribunals have been used in the United States to settle family disputes and spiritual debates. But through arbitration, religion is being used to sort out secular problems like claims of financial fraud and wrongful death.

Customers who buy bamboo floors from Higuera Hardwoods in Washington State must take any dispute before a Christian arbitrator, according to the company’s website. Carolina Cabin Rentals, which rents high-end vacation properties in the Blue Ridge Mountains of North Carolina, tells its customers that disputes may be resolved according to biblical principles. The same goes for contestants in a fishing tournament in Hawaii.

….Pamela Prescott battled for years to prove that she had been unjustly fired from a private school in Louisiana. The crux of her case — which wound through arbitration, a federal appeals court and state court — was references in her employment contract to verses from the Bible.

The Prescott case is sort of amusing. Prescott partially won her complaint based on the arbitrator’s cite of Matthew 18:15. Here’s what happened next:

The school had required Ms. Prescott to agree to Christian arbitration as a condition of her hiring. But when Northlake lost, it appealed the arbitration award in federal court, arguing that Mr. Thomas’s ruling was inconsistent with Louisiana law.

The case dragged on for four more years. An appeals court in New Orleans ruled that it had no ground to overturn the Christian arbitrator. Northlake appealed the case all the way to the Supreme Court, which declined to hear it.

In other words, religion for thee, but not for me.

Anyway, I guess this is just a typical liberal media cover-up, since we all know the real problem is Muslims and sharia law. But that was too hot for the Times to handle, so instead they’re pretending that Christians do the same thing. It’s no wonder so many people turn to Fox for the real story these days.