They would be surprised to find that unemployment is at five percent, America’s recovery from the financial crisis has outpaced that of other developed nations, the percentage of uninsured Americans has been plummeting even as Obamacare 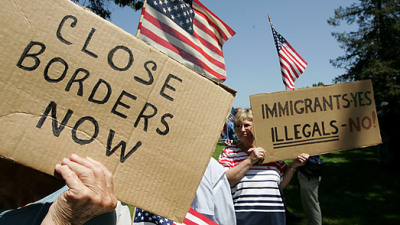 has cost less than expected, and there’s so much money flowing into new ideas and firms in the tech industry that observers are worried over a second tech bubble.

….This leaves Republicans with two problems. The first is that the economy simply isn’t as bad as they’re making it out to be — and so the apocalyptic rhetoric may well run into month after month of good jobs numbers during the general election….The second is that Republicans are increasingly focused on economic problems they don’t really know how to solve, and don’t have much credibility to say they will solve.

This is all completely correct, but I think there’s an interesting point buried here: Republicans aren’t really talking about the economy when they adopt this “apocalyptic” rhetoric. In fact, so far this hasn’t been an election about the economy at all.

It’s a culture war election. The topics that have really driven the campaign so far are illegal immigration, political correctness, abortion, Obamacare, Vladimir Putin, the war on Christianity, and so forth. By contrast, the attacks on the economy mostly feel pro forma and are used primarily to add flavor to the real issue driving Republican voters. And right now, that issue is the apparent feeling among many conservatives that the America they love is spiraling down the drain, becoming weak and dependent and altogether too brown.

Obviously this has been building for years, but it feels like this is the first election in which it’s really front and center. Of course, if America is really sinking into socialism and social degeneration, then the economy must be doing badly too. So all the candidates do their best to make it sound like Democrats have driven us into a ditch. That’s normal politics, but this year it’s also a stand-in. When they say the economy is doing badly, what they really mean is that America is doing badly. And their audiences are eating it up.