I had a doctor’s appointment this afternoon, so I missed the twilight session of the Benghazi hearing. When I got home, it was 8 pm on the East Coast….and the hearing was still going on. 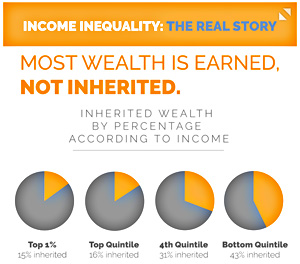 Yikes. I assume I didn’t miss anything, did I?

Anyway, while I was in the waiting room I was browsing The Corner and came across the graphic on the right. It struck me as peculiar. The bottom income quintile in America gets 43 percent of its wealth from inheritance? Even granting that these households don’t have much wealth to begin with, that really didn’t seem right.

There was a link to a piece by Kevin Williamson that turned out to be two years old—which is something like two decades in blog years. Still, I was curious, and I had nothing else to do while I waited. So I clicked the link. Here’s what Williamson says:

For the top income quintile, gifts and inheritances amount to 13 percent of household wealth, according to research published by the Bureau of Labor Statistics….Meanwhile, inherited money makes up 43 percent of the wealth of the lowest income group and 31 percent for the second-lowest. In case our would-be class warriors are having trouble running the numbers here, that means that inherited money on net reduces wealth inequality in the United States.

This is pretty misleading. I tracked down the BLS report, and it turns out this 43 percent figure is only for those households that inherit anything in the first place. But as you might expect, a mere 17 percent of low-income households report any inheritance at all. If you average this wealth across all 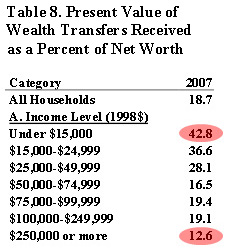 So….7.4 percent vs. 4.9 percent. When you compare entire groups, which is the right way to do this, there’s not very much difference between the two. And in a practical sense, the difference is even more negligible. If you run out the numbers, the wealth of the bottom group increased from $56,000 to $63,000 per household. Big whoop. Conversely, the wealth of the top group increased from $7.2 million to $7.6 million. That’s a nice chunk of change. In a technical sense, the low-income group got a bigger percentage increase, and income inequality has been reduced. But in any normal human sense, $7,000 is such a tiny amount that it doesn’t matter. In a nutshell, rich people inherit a lot of money and poor people don’t.

I’m not really sure what the point of being misleading about this is, since Williamson’s main themes in the linked piece are (a) rich people don’t get most of their money from inheritance, and (b) rich people are mostly married and work a lot of hours. Those things are both true, and there’s no real reason to toss in the other stuff. All it does is provide grist for other people to make misleading graphics later on.