Last year, when I was getting my blood drawn with dismaying frequency, I sang the praises of Elizabeth Holmes, a young billionaire who founded a company that promises to perform lab tests with 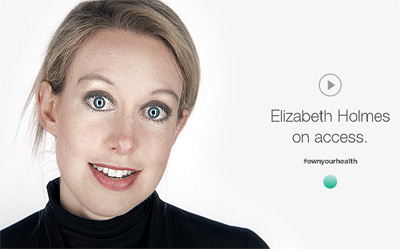 only as much blood as you get from a finger prick. That sounded great.

My blood tests have gotten much less frequent these days, and I’ve mostly gotten over my needle phobia anyway,1 so I haven’t paid much attention to Theranos, the Silicon Valley darling Holmes founded. But this morning, John Carreyrou of the Wall Street Journal reported that Theranos was basically a house of cards. It actually does very little testing using its “Edison” finger-prick technology, and has had trouble getting FDA approval for its tests due to questions about the accuracy of its results.

Tonight, Carreyrou reports that things are even worse than that:

Under pressure from regulators, laboratory firm Theranos Inc. has stopped collecting tiny vials of blood drawn from finger pricks for all but one of its tests….That test detects herpes and was cleared by the FDA in July.

….Theranos has since nearly stopped using the lab instrument, named Edison after the prolific inventor, according to the person familiar with the situation. By the time of the FDA inspection, the company was doing blood tests almost exclusively on traditional lab instruments purchased from diagnostic-equipment makers such as Siemens AG , the person says.

….Most of Theranos’s blood-drawing sites, which it calls “wellness centers,” are located inside Walgreens Boots Alliance Inc. drugstores….A blood-drawing technician at a Walgreens in the Phoenix area, reached by phone late Thursday, said Theranos had “temporarily suspended” finger-prick draws and was only drawing blood from patients’ arms with needles at that store.

That doesn’t sound very promising. I have a feeling that Elizabeth Holmes might not make the Forbes list of billionaires next year. She might be lucky if Theranos even still exists.

1So far, the upsides of my chemotherapy have been (1) better hair, (2) weight loss2, (3) less dread of blood draws, (4) forbidden to clean the litter box,3 and (5) the purchase of a powered bed, which is really cool.

2Though, sadly, I’ve gained most of it back.

3Though, sadly, I’ve since been given permission to do this again.