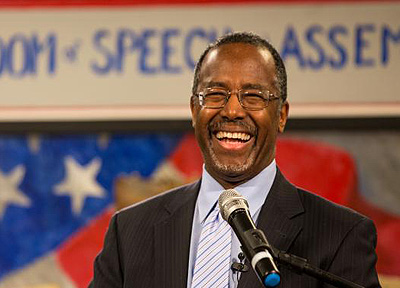 Ryssdal: As you know, Treasury Secretary Lew has come out in the last couple of days and said, “We’re gonna run out of money, we’re gonna run out of borrowing authority, on the fifth of November.” Should the Congress then and the president not raise the debt limit? Should we default on our debt?

Carson: Let me put it this way: if I were the president, I would not sign an increased budget. Absolutely would not do it. They would have to find a place to cut.

Ryssdal: To be clear, it’s increasing the debt limit, not the budget, but I want to make sure I understand you. You’d let the United States default rather than raise the debt limit.

Carson: No, I would provide the kind of leadership that says, “Get on the stick guys, and stop messing around, and cut where you need to cut, because we’re not raising any spending limits, period.”

Ryssdal: I’m gonna try one more time, sir. This is debt that’s already obligated. Would you not favor increasing the debt limit to pay the debts already incurred?

Carson: What I’m saying is what we have to do is restructure the way that we create debt. I mean if we continue along this, where does it stop? It never stops. You’re always gonna ask the same question every year. And we’re just gonna keep going down that pathway. That’s one of the things I think that the people are tired of.

Ryssdal: I’m really trying not to be circular here, Dr. Carson, but if you’re not gonna raise the debt limit and you’re not gonna give specifics on what you’re gonna cut, then how are we going to know what you are going to do as president of the United States?

It sure sounds as if Carson doesn’t know what the debt limit is, doesn’t it? Kai Ryssdal tries manfully to get a straight answer out of him, and after the fourth try Carson rambles into a long disquisition on the infinite-time-horizon fiscal gap, at which point Ryssdal finally gives up. I guess I don’t blame him.

On the other hand, I’ll give Carson credit for something Ryssdal doesn’t: telling him what he’d cut in order to balance the budget. Carson is pretty clear about this: he would cut the government across the board by 3-4 percent via the simple expedient of keeping spending flat for everything. In real terms, this gets you to Carson’s 3-4 percent decrease. He says he’d do this for three or four years, and boom! Balanced budget.

Ryssdal badgers Carson about this, but doesn’t ask the obvious follow-ups: You’d cut Social Security 3-4 percent each year? Medicare? Defense? Veterans? If the answer is no—as it probably would be—then you ask Carson how he’s going to balance the budget with just the stuff that’s left over.

In any case, it’s pretty scary that a guy this ignorant of the basics of governance is doing so well in the Republican primary. Not surprising, maybe, but still scary.