OK, folks, it’s time to get down to business. Summer is over. Congress is back from its recess. Budgets need to be passed. And this time around, we’re not going to put up with any shutdown shenanigans. Right?

Yet to be answered is how far Ted Cruz and other Republicans — powered by conservative outrage over Planned Parenthood — are willing to push Congress to the brink of a shutdown in order to defund the women’s health organization.

Cruz, one of a handful of senators vying for the GOP presidential nomination in 2016, gave a preview of his strategy with a letter he began circulating last week….“The American people should no longer be forced to fund the abortion industry,” the letter, which 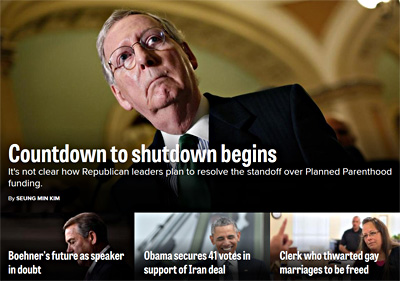 Cruz’s aides are still circulating for signatures, reads. “Therefore we will oppose any government funding legislation that would authorize or provide federal funds for Planned Parenthood.”

….Top Republicans are also looking at poll numbers. An Aug. 31 Quinnipiac Poll found that 69 percent of Americans — including 53 percent of Republicans — oppose shuttering the government over a dispute over Planned Parenthood funding.

….All that has mattered little to conservatives. “If Barack Obama and Harry Reid think it’s more important that Planned Parenthood, after what we know about them, gets taxpayer money, they think that’s more important than funding our troops, that’s a sad commentary on Obama and Reid,” Rep. Jim Jordan (R-Ohio), a conservative leader in the House, told POLITICO in a recent interview.

These guys really never learn. Jordan is playing the same game that Cruz and all the other shutdownistas play: flipping the script and claiming that it’s Obama who’s shutting down the government, not conservatives. But this never works. Never. Whether it’s fair or not, the public generally blames the folks who insist on killing the budget over their pet issue, not the guy who’s willing to keep funding everything the same as always. And again, fair or not, all the optics are on the president’s side. He gets to selectively shut stuff down and then blame it all on Republicans.

It’s also a little hard to figure out what the political strategy is here. It’s true that a government shutdown might get the base excited, but (a) the base is already going to vote for them anyway, and (b) the base will get a lot less excited when the shutdown inevitably fails.

So what are we left with? One possibility is that, for some reason, Cruz and company think they can win this time. I’ve not heard even a peep about why they might think that. A second possibility is that this isn’t aimed at the public, but at the Republican leadership in Congress. This shutdown is aimed at ousting John Boehner and Mitch McConnell and getting a team of their own at the top. Maybe Cruz himself! I wouldn’t put it past the guy to think he ought to be in line.