It’s Saturday, and I am oh-so-tired of Donald Trump. (The latest: he finally coughed up his favorite Bible verse, but it doesn’t actually appear anywhere in the Bible. Since this was an interview with the Christian Broadcasting Network, he knew this had to be coming but still didn’t bother to look up a genuine verse. I swear, he’s just taunting us. He’s actually a Democrat with an IQ of 300 and he’s running a test to see just how far you can bamboozle the press corps and the conservative base and still lead the Republican primary race. Judging by Wednesday’s debate performance, he’s finally tiring of the gag because it appears you simply can’t go too far.)

So: no more Donald. Instead, prepare yourself for a ridiculous topic explored at ridiculous length. Here’s the background: the iPod in my car is set to permanent shuffle play, and yesterday the Eagles’ “Hotel California” came up. I’ve heard this song hundreds of times, I suppose, but this time one word in the final famous lines suddenly struck me as odd:

“Relax,” said the night man,
“We are programmed to receive.
You can check out any time you like,
But you can never leave.”

Programmed? This song was written in 1976, before the PC revolution and the rise of Silicon Valley conspired to make programming into a common word. [See update below.] Even cheap programmable calculators had just barely started to hit the market. It was certainly a common word among techie types, which is probably why it never seemed odd to me before, but was it common among shaggy rock musicians? It doesn’t seem like it would be. Did Don Henley take an intro CS course at North Texas State? Or is the word being used in a different sense?

Naturally, I went to my favorite source for word usage over time, the Google Ngram Viewer. Here’s what it shows: 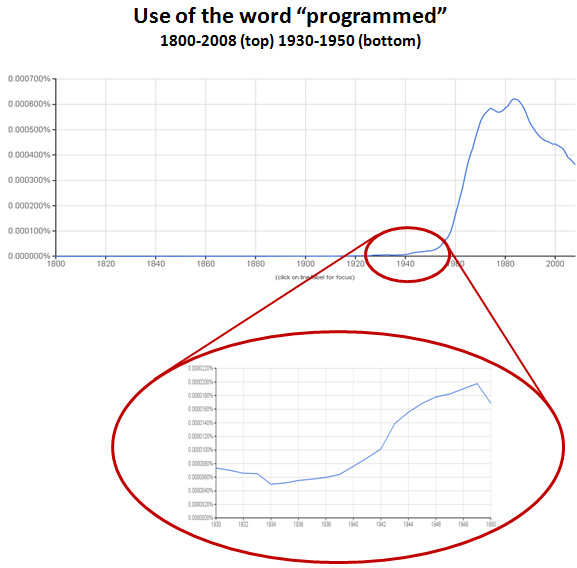 There are two notable things here. First, the use of programmed peaks in 1984. That’s odd. You’d think it would have kept on rising into the stratosphere. It’s in common use today for everything from building a space shuttle to setting up your toaster oven. [In comments, weirdnoise suggests that this is because coding is used these days rather than programming. Could be.]

More germane to my question, however, is the fact that its use starts to rise around 1940. What’s up with that? This is obviously a non-computer usage, since digital computers hadn’t been invented at that point. So let’s go to Google Books and check things out. Programmed appears to have been commonly used in four basic senses. Here are examples of each:

War Housing: Hearings Before the Committee on Public Buildings and Grounds, 1942: “The 20,000 units in item 5b and the 100,000 additional Government dormitories yet to be programmed and financed, as shown in item 5c….”

Health and Its Maintenance: A Hygiene Text for Women, 1931: “She has always programmed her work. She never undertook more than she could do and do well….”

In order, the four senses in which programmed was used are: (1) in construction and engineering scheduling, (2) in radio scheduling, (3) as a generic synonym for scheduled, and (4) the IBM sense, which is a precursor to the common computer programming sense of today.

The first three of these are all variants of scheduled, or else used in the similar sense of verbing the noun program. The final one is the source of the contemporary usage of the word in the software biz.

So what were the Eagles thinking of? It doesn’t make sense that it was used as a synonym for scheduled. That doesn’t read right, and anyway, why not just use the word scheduled instead? The computer sense works in context, but somehow seems unlikely. That leaves us with the radio programming sense, and I suppose that’s the right one. Musicians would obviously be familiar with this usage, and so would their audience.

I warned you that this was a ridiculously long post about a ridiculous topic. Don’t blame me if you read all the way to the end. But now that you have, feel free to comment if you think there’s a possibility I’ve left out.

UPDATE: Via Twitter, Dan Perkins (aka Tom Tomorrow) reminds me that programmed—in the computer programming sense—was fairly commonly used in science fiction TV and movies in the 60s and 70s. For example, here it is from 1965 in the first episode of Lost in Space:

DR. SMITH: I have reprogrammed the robot. His power has been activated. Exactly eight hours after launch the robot will destroy the spaceship with all hands aboard.

Here it is from 1967 in I, Mudd, an episode in the original Star Trek series:

KIRK: Who sent you?
NORMAN (an android): I am not programmed to respond in that area.

LOWELL: Hey, that’s really excellent. Now, um…you see, what I’ve done is…I’ve reprogrammed both of you so that now you’ll respond directly to me.

OWEN: You, I suppose you’re programmed for etiquette and protocol.
THREEPIO: Protocol? Why, its my primary function, sir. I am well-versed in all the customs—
OWEN: I have no need for a protocol droid.
THREEPIO: Of course you haven’t, sir. Not in an environment such as this. That is why I have been programmed—

OK, I’ll stop now. The point is that perhaps the computer programming sense of the word was actually pretty common in popular culture by 1976. So I guess there was no real mystery to be solved after all.

UPDATE: Or maybe the song is using the word in the new-agey sense of cult programming. That would make sense on multiple levels.