A federal judge has ruled that John Boehner’s lawsuit against Obamacare can proceed:

U.S. District Court Judge Rosemary M. Collyer ruled Wednesday that the House can pursue its claim that the administration violated the Constitution when it spent public money that was not appropriated by Congress….The House argues that Congress never specifically approved spending that money, and denied the administration’s request for it. The Obama administration 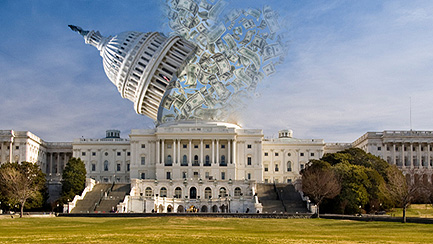 insists it is instead relying on previously allocated money that it is allowed to use.

I’m pleased by this ruling even though I suspect Boehner’s suit is specious. Let me explain why.

Collyer ruled today only on the narrow grounds of whether the House, as an institution, has standing to sue the administration in the first place. The rule currently in place makes this almost impossible. You’re allowed to sue only if you can show that you’ve been harmed in some way, and members of Congress usually can’t show that an executive branch interpretation of a law does them any specific harm. But in many cases, no one else can show harm either. It’s not enough to merely be a taxpayer, and argue that your taxes are being misused. You have to show particularized harm.

The upshot of this is that sometimes there’s virtually no one with standing to sue even though there’s a legitimate disagreement that needs to be adjudicated. This has always rubbed me the wrong way. As long as a complaint isn’t obviously frivolous, there ought to be someone who can take it to court in a reasonably expedient way.

The justification for the current state of affairs is that courts shouldn’t get involved in political disputes between two branches of government. This is, generally speaking, probably wise. But Collyer ruled that Boehner’s suit was not merely a complaint about the executive’s implementation of a law—for which the House would indeed lack standing. It’s an argument that the executive branch has specifically violated the Constitution by spending money that Congress hasn’t appropriated:

The Non-Appropriation Theory is not about the implementation, interpretation, or execution of any federal statute. It is a complaint that the Executive has drawn funds from the Treasury without a congressional appropriation.

….The Congress (of which the House and Senate are equal) is the only body empowered by the Constitution to adopt laws directing monies to be spent from the U.S. Treasury….Yet this constitutional structure would collapse, and the role of the House would be meaningless, if the Executive could circumvent the appropriations process and spend funds however it pleases. If such actions are taken, in contravention of the specific proscription in [Article 1 of the Constitution], the House as an institution has standing to sue.

It would be unwise in the extreme to allow any House member to sue the president anytime they were unhappy about a law. That way lies madness, and it’s what standing is all about. You can’t just sue willy nilly because you think it would make a nice headline. But in this case, Collyer has ruled fairly narrowly. This case is not about mere implementation, but about a core responsibility of the House. It was not brought by a single member of Congress, but by the House as an institution. And it’s a case in which it’s unlikely that anyone else could show standing. I’m pretty satisfied with that. As long as it’s sustained on suitably narrow grounds, I hope that Collyer is upheld on appeal.

POSTSCRIPT: You’ll notice that I said nothing about the actual case itself. That’s because I wanted to focus solely on whether the House should have standing to even bring a complaint in the first place.

As it happens, the suit is over a part of Obamacare called Cost Sharing Reduction, which pays out money to insurance companies in order to lower premiums for the poor. And although the House might have standing to sue, I expect the suit will eventually fail on the merits. I find this argument, from Jordan Weissmann, persuasive:

Even if they win the right to argue their case, the House Republicans’ argument might be a lot more feeble than it looks, as David Super, a Georgetown University law professor, explained to me. By passing the Affordable Care Act and instructing the administration to pay insurers their subsidies, Super said, Congress effectively appropriated the funds to do it. “The Supreme Court has been very clear that you do not have to have a law that says ‘appropriations’ across the top. You just need a law directing that the money be spent,” he said.

But there are even deeper reasons the case might not in fact be a very effective weapon against Obamacare. If the administration did lose at court, insurers would still be entitled to their subsidy payments under the law. Therefore, they could simply file their own suit against the federal government at the Court of Federal Claims and collect the money owed to them.

“Even if one imagines this case winning, which I have great difficulty imagining, the result would be that the insurers would have to take a few extra steps to get reimbursed, not that the money would not flow,” Super said. “In cases like that, the courts have generally been pragmatic, and not required the filing of a lawsuit that everybody knows would win.”

But you never know what the Supreme Court might do these days. Maybe the conservative bloc is tired of endlessly adjudicating Obamacare complaints and will throw out the case. Or maybe they regret letting Obama win the previous cases, and will use this opportunity to give him a little bit of a black eye. Who knows? But unless a higher court reverses Collyer on standing, we’ll find out in a couple of years.