This post is about Donald Trump—sorry!—but the topic is something I’ve been a little curious about for a while: how much of Trump’s wealth is inherited vs. earned? The basics are easy: Trump’s father turned over control of the family real estate business to him in 1974. At the time, it was worth about $200 million. Trump would eventually inherit one-fifth of this, so his share of the company was worth about $40 million to start with.

Over at National Journal, Shirish Dáte estimates that if Trump had put that money into an index fund of S&P 500 stocks, it would be worth about $3 billion today. If he’d taken the $200 million he was reportedly 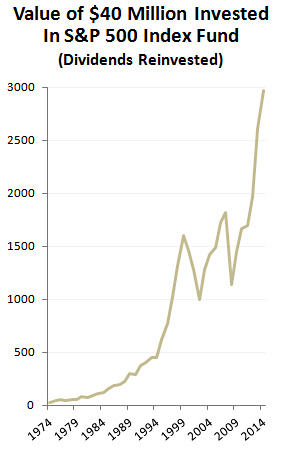 worth in 1982 and done the same, he’d be worth $8 billion. So how does that compare to Trump’s actual net worth? Here’s Dáte:

“Every year, Trump shares a lot of information with us that helps us get to the figures we publish. But he also consistently pushes for a higher net worth—especially when it comes to the value of his personal brand,” Forbes reporter Erin Carlyle wrote this June, explaining the magazine’s assessment that Trump was worth $4.1 billion, less than half of his claimed net worth. A subsequent review by Bloomberg found he was worth $2.9 billion.

….Perhaps the most deeply researched account of his wealth is a decade old: the book TrumpNation, by former New York Times journalist Tim O’Brien, who found three sources close to Trump who estimated that he was worth between $150 million and $250 million….Trump wound up suing O’Brien for defamation, claiming his book had damaged his business. The suit was eventually dismissed, but not before Trump sat for a deposition in which he admitted that he routinely exaggerated the values of his properties.

….That 2007 deposition also revealed that in 2005, two separate banks had assessed Trump’s assets and liabilities before agreeing to lend him money. One, North Fork Bank, decided he was worth $1.2 billion, while Deutsche Bank found he was worth no more than $788 million.

So….at a guess, Trump is worth somewhere in the neighborhood of $2 billion in 2015. Anything above that is based on valuations of his personal brand—which might be worth something in theory, but buys no jet fuel or campaign ads. In terms of actual, tangible net worth, he’s worth considerably less than the $3 billion (or $8 billion) he’d be worth if he’d just dumped his share of the family fortune into a Vanguard fund.

In other words, over the course of the past four decades, Trump’s business acumen has netted him somewhere between -$1 billion and -$6 billion. Ouch. Virtually every person in America can claim a better financial record than that.

Now, in fairness, Dáte’s numbers for the S&P fund assume that all dividends are reinvested, which would have meant Trump had no income to live on. Obviously he spends a fair amount every year, and if you take that into account the Vanguard strategy wouldn’t look as good. Plus, of course, there’s the fact that Dáte is a THIRD-RATE LOSER who is JEALOUS of Trump’s BRILLIANT CAREER and does anything he can to DEMEAN Trump’s SUCCESS. So take him with a grain of salt.