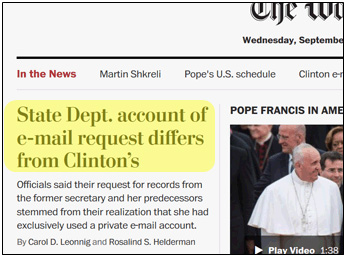 Hillary Clinton’s emails are once again the subject of a front-page story, this time in the Washington Post. And once again, I’m mystified by what the point is supposed to be. I’ve read tonight’s story three times trying to figure it out.

The entire piece is based on a statement the State Department sent to the Post explaining why they originally asked for Hillary’s emails. Supposedly this statement “undercuts” Hillary’s own explanation, which she’s offered on multiple occasions. But does it? Here are the competing explanations as written by the Post:

Hillary Clinton doesn’t say anything here about why the State Department asked for her emails—though it was hardly a secret that they were responding to obsessive congressional inquiries about Benghazi. What she did say is that State also asked three other former secretaries for their emails, which is what the State Department says as well.

There’s also alleged to be a “discrepancy” between Hillary’s timetable and State’s. But what is it? Apparently State first contacted Hillary informally in July, at which point one of her aides retrieved the emails and began going through them to decide which ones were official and which were personal. In October, State officially asked four former secretaries (Clinton, Rice, Powell, and Albright) to provide their email records. Hillary provided hers in December.

I don’t get it. I’m not seeing the problem with this. Hillary’s staff began the process of retrieving emails as soon as they first heard from State, and turned them over within a few months. What’s the issue supposed to be here?

In any case, the truly gobsmacking thing here has nothing to do with Hillary Clinton. Can you figure out what it is?

“In the process of responding to congressional document requests pertaining to Benghazi, State Department officials recognized that it had access to relatively few email records from former Secretary Clinton,” State Department spokesman John Kirby said in a statement….Kirby added that the agency then recognized “that we similarly did not have extensive email records from prior Secretaries of State and therefore included them when we requested their records in October 2014.”

….The early call from the State Department [in July] is a sign that, at the least, officials in the agency she led from 2009 to 2013 were concerned by the practice [of using a private email server] — and that they had been caught off guard upon discovering her exclusive use of a private account.

….State Department staffers were trying to figure out where her work e-mails were stored and how they might try to assemble them, one official said. Clinton turned over copies of about 30,000 work-related e-mails to the department in December.

Holy crap. In 2014, the State Department suddenly realized that it had very few email records from secretaries going back to Madeleine Albright. Two years after Hillary had left office, they were trying to figure out where her emails were stored. This very much does not suggest to me that they were “caught off guard” by Hillary’s use of a private server. Rather, it suggests only that the State staffers responding to the congressional inquiries didn’t happen to know that Hillary used a private server. More importantly, it also suggests that for well over a decade, (a) the department had no oversight of emails sent and received by Secretaries of State, (b) didn’t really care about these emails, (c) didn’t archive them, and (d) had no idea where they might be. It happens to be Benghazi that finally got them to start checking on this, but that’s irrelevant. It could have been anything.

The real question here is why, for nearly 20 years, the State Department seemingly had no real policies about and—apparently—no real interest in preservation of official emails from Secretaries of State. Seriously, folks?