A reader tells me this story seems right up my alley:

Google, a leader in efforts to create driverless cars, has run into an odd safety conundrum: humans.

Last month, as one of Google’s self-driving cars approached a crosswalk, it did what it was supposed to do when it slowed to allow a pedestrian to cross, prompting its “safety driver” to apply the brakes. The pedestrian 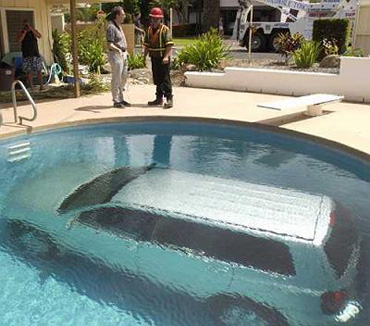 was fine, but not so much Google’s car, which was hit from behind by a human-driven sedan.

….Dmitri Dolgov, head of software for Google’s Self-Driving Car Project, said that one thing he had learned from the project was that human drivers needed to be “less idiotic.”

That’s the spirit! And when Skynet takes over, humans will finally cease to be such a nuisance. Driverless car nirvana will be at hand.

Ahem. In reality, of course, this whole story is sort of silly. Of course the biggest problem with driverless cars is humans. What else would it be? Plop a few thousand driverless cars into an empty city and they’d get along swimmingly. No one is unaware of this, least of all Google.

But I suppose from Google’s perspective, stories like this are useful as ways to calm fears about driverless cars. And there is a good point to be made about that: driverless cars don’t have to be perfect to be useful. They just have to be at least as good as humans. So while the fact that humans are generally idiotic drivers might be a short-term annoyance, in the long run it’s a huge bonus for Google. They don’t have to beat the Pittsburgh Steelers, just the local high school JV team.

This, by the way, is why I’m so generally bullish on artificial intelligence. It’s not because I have such a high opinion of computers, but because I have such a low opinion of humans. We really are just overclocked chimpanzees who have convinced ourselves that our weird jumble of largely Pavlovian behaviors—punctuated by regrettably rare dollops of intelligence—is deeply ineffable and therefore resistant to true understanding. Why do we believe this? Primarily for the amusingly oxymoronic reason that we aren’t smart enough to understand our own brains. The silicon crowd should be able to do better before long.

POSTSCRIPT: By the way, I’m a lovely driver. It’s all you other folks who are causing so many problems.