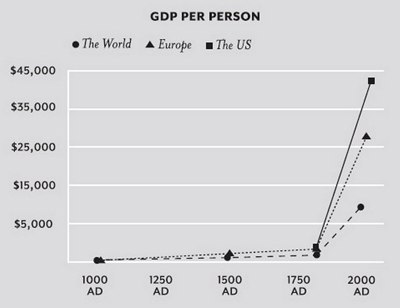 James Pethokoukis says that economist Deirdre McCloskey has written “the most powerful defense of market capitalism you will ever read.” It’s based on the chart on the right, which shows the fantastic growth of the world economy since about 1800:

Now, McCloskey does not like the word “capitalism.” She would prefer our economic system be called “technological and institutional betterment at a frenetic pace, tested by unforced exchange among all the parties involved.”

Or perhaps “fantastically successful liberalism, in the old European sense, applied to trade and politics, as it was applied also to science and music and painting and literature.”

I am a considerable fan of capitalism by nearly any standard (aside from the current Republican Party one, which essentially holds that you’re a socialist if you believe in any regulation of large corporations at all). So sure: capitalism or free market exchange or whatever you want to call it certainly deserves plenty of credit here.

But was it the main driving force of the post-1800 economy? McCloskey says the Great Expansion wasn’t the result of “coal, thrift, transport, high male wages, low female and child wages, surplus value, human capital, geography, railways, institutions, infrastructure, nationalism, the quickening of commerce, the late medieval run-up, Renaissance individualism, the First Divergence, the Black Death, American silver, the original accumulation of capital, piracy, empire, eugenic improvement, the mathematization of celestial mechanics, technical education, or a perfection of property rights.” Those had existed for a long time. Rather, it’s the fact that European elites “came to accept or even admire the values of trade and betterment.”

Does that seem right? I don’t know much about China or India—and I might be wrong about Europe too—but I’ve always thought that trade and commerce were also relatively free during, say, the height of the Roman Empire. The landed elites made a lot of money in trade, and if merchants weren’t quite pillars of society, they were hardly social lepers either. The legions were routinely used to protect trade routes. Corruption was endemic, but tariffs and regulations on trade were fairly mild. The pursuit of wealth was respectable, and accounting practices were sophisticated.

Is this all roughly correct? Maybe I’m woefully misinformed. But it seems like the big difference between AD 0 and AD 1800 wasn’t so much attitudes toward trade as it was the obvious thing that McCloskey left off her list: machines. As long as humans and animals were the only source of power, there was a limit to how much wealth could be generated. But if the Romans had invented steam engines and electrification, we’d all be speaking Latin today and arguing about what made classical Roman culture so special.

This is something that’s been a subject of academic study for a long time, and I hardly expect to break any new ground here. But while a respect for fairly free trade might be a prerequisite for exponential economic growth, the example of Rome suggests that more than that is needed. The truly interesting question, then, is: why did 18th century Europeans invent machine power but 1st century Europeans didn’t?