A “friend” of mine forced me to read the transcript of Sean Hannity’s interview with Donald Trump earlier this week, and it was fascinating in a train wreck kind of way. After a few minutes, Hannity said it was time to get serious and talk policy. Trump says great, let’s do it. So Hannity then 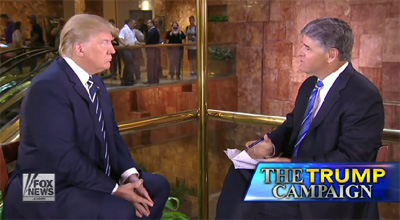 tries manfully to get Trump to explain how Mexico is going to pay for a wall on the border. No dice:

HANNITY: You talked about Mexico. How quickly could you build the wall? How do you make them pay for the wall, as you said?

TRUMP: So easy. Will a politician be able to do it? Absolutely not….

HANNITY: Is it a tariff?

TRUMP: In China — listen to this. In China, the great China wall — I mean, you want to talk about a wall, that’s a serious wall, OK….

HANNITY: So through a tariff?

TRUMP: We’re not paying for it. Of course.

HANNITY: You want to do business, you’re going to help us with this.

TRUMP: Do you know how easy that is? They’ll probably just give us the money….And I’m saying, that’s like 100 percent. That’s not like 98 percent. Sean, it’s 100 percent they’re going to pay. And if they don’t pay, we’ll charge them a little tariff. It’ll be paid.

Trump gets five chances to explain his plan, and all we get is endless bluster. It’s easy! Hell, the Great Wall of China cost more! We’re not paying for it! The closest Trump comes to an answer—after prompting from Hannity—is some kind of tariff on Mexican goods, which of course is illegal under NAFTA. Trump would have to abrogate the treaty and get Congress to agree. In other words, maybe just a wee bit harder than he thinks.

(Oh, and Mexico’s president says the entire idea is a fantasy. “Of course it’s false,” a spokesman told Bloomberg News. “It reflects an enormous ignorance for what Mexico represents, and also the irresponsibility of the candidate who’s saying it.”)

The whole interview with Hannity is like this. The fascinating part is Trump’s ADHD. He just flatly can’t stay on topic, and I don’t think it’s fake. He constantly veers off into side topics: how far ahead he is in the polls; how everyone says he won the debate; how good a student he was at Wharton; how he’d send Carl Icahn to China; etc.

And then there’s the Hannity/Trump math. In Texas, there have been 642,000 crimes by illegal immigrants since 2008. Obamacare premiums are up more than 40 percent this year. Unemployment is at 40 percent. The whole 5.4 percent thing is just a government lie.

I don’t even really have a comment on this stuff. On a lot of subjects—his replacement for Obamacare, for example—it’s obvious he’s just making up his policy on the spot. Um, health accounts! And, um, no more state lines! And catastrophic insurance, sure! And preexisting conditions! You bet. And then….an ADHD segue into Obama playing golf, and Hannity finally gives up and switches topics.

I understand that the second part of the interview is even better. If I’m bored enough, I’ll take a look at it when the transcript goes up. Like I said, kind of fascinating if you’re the sort of person who likes to gawk at car wrecks on the side of the road.