In 2012, I discussed a noteworthy experiment by Kim Fridkin and other scholars at Arizona State University. During the 2004 campaign, they showed people some footage of the third presidential debate; or the debate, plus 20 minutes of post-debate commentary on NBC; or the debate, plus 20 minutes’ time to read commentary on CNN.com….Those watching the debate tended to think that Kerry had won, as did those who read analysis 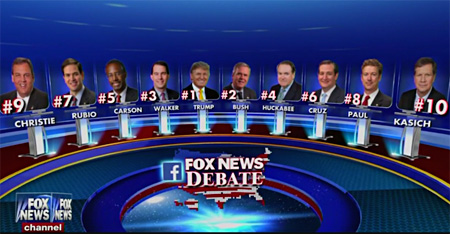 on CNN. But those who watched the NBC postmortem had the opposite impression.

….The news media does a lot of interpretive work for us — framing events in particular ways, telling us how to interpret these events, and so on. Those judgments are sometimes explicit and sometimes phrased in passive voice constructions (“Senator Smith was widely seen as victorious”) or sourced to, well, others in the news media (“Many commentators saw Senator Smith as victorious”). So even if you don’t watch the debate, you may be able to tell which candidate, if any, will benefit — and whether that candidate is someone other than Trump. Just read the news on Friday.

This is absolutely true, and it’s even true in a meta way: news commentary affects the way other news commentators view the debate. Conventional wisdom can congeal very quickly after a debate, as pundits get themselves into sort of a vicious circle of not wanting to be seen as the odd man out. It’s peculiar that this matters to them, but it very plainly does.

And there’s not much you can do about it. That’s why I make it a point to turn off the TV and write my debate wrap-ups before I hear what anyone else has to say. I’ve found that other commentary affects me, mostly by making me a little nervous about saying what I initially thought. That’s stupid, but it’s human nature. So now I write in isolation and then publish. Then I turn on the TV and start reading my Twitter stream. If that affects my conclusions, I put it in a separate post. But at least the very first one is set in amber, maybe prescient or obtuse, but genuinely mine.

In any case, I agree with Sides and the research he cites. You can see public reaction to debates change surprisingly quickly between the insta-polls, mostly taken before the media weighs in, and polls taken in the day or two afterward. The latter are overwhelmingly populated by people who didn’t even watch the debate, but heard about the winners and losers from wherever they consume news. And that’s the impression that sticks.