I didn’t get a chance to hear any of the post-game commentary after last night’s debate. After blogging continuously since 2 pm (Pacific time) I just collapsed in the living room with the pizza Marian had gotten and watched whatever it was she had on TV. So I never got a chance to see who had been anointed the winner.

This morning I see that apparently the answer is Marco Rubio, which makes Marian two for two picking winners. Maybe she should be the one writing this blog. Ed Kilgore 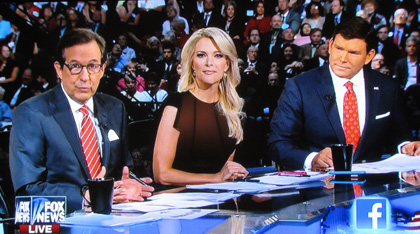 had about the same reaction to this that I did:

As for the “winners” and “losers” bit, there’s no question Carly Fiorina is being deliberately promoted to the Big Stage where GOPers wanted her all along to supply low-gender-politics-risk attacks on Hillary Clinton. I watched her yesterday and saw a former CEO used to doing power-point presentations for stockholders doing her standard speech, amplified by a very lucky question she got about Donald Trump. And for all the (justified) talk about the Fox moderators being tough on candidates, nobody’s asking Fiorina the obvious question about her extremely limited qualifications for the presidency.

….I’m also a bit mystified by all the wild praise today for Marco Rubio, but maybe I’ve just seen his earnest Second-Generation-American routine one time too many to be impressed any more. He got reasonably lucky in his questioning; the only heat he drew was over his alleged support for a rape exception to an abortion ban; he denied it, and used the question to position himself as a real RTL ultra, which is apparently what he wanted to do.

Yeah, my sense is that both Fiorina and Rubio did fine, and since no one else did spectacularly, maybe that’s enough to make them winners. But big winners? I don’t see it either.

Interestingly, I also see this morning that the commentariat is quickly converging around the idea that Fox News manipulated the debate pretty blatantly. The GOP wanted Fiorina on the main stage because they wanted a woman there, and Fox obliged by giving her easy questions and then praising her to the skies after the debate was over. Likewise, the GOP really wants Trump gone, and Fox obliged by asking him lots of awkward questions. Trump himself certainly played along, claiming afterward that he had been ambushed and treated badly by the moderators, especially Megyn Kelly.

Maybe. I didn’t notice Fiorina getting off any easier than the other candidates, but I did notice the over-the-top effusive praise she received in the post-game shows on Fox. Something sure seemed to be going on there. Fiorina wasn’t that good.

As for Trump, I think he was bound to have trouble in a debate forum, where he has less opportunity to duck questions he doesn’t want to answer. Also, as I said last night, his schtick gets old when you see it over and over in the space of two hours. If, at some point, you don’t seem to take any of the questions seriously, even your supporters are going to start thinking that maybe you don’t belong in the White House.

In any case, this seems to be a pretty good example of the media having a bigger impact than the debates themselves. Fiorina and Rubio were the winners of last night’s media bowl and Trump was the loser. In the future, everyone will know to stay on Megyn Kelly’s good side.