The Washington Post reports today on what’s sure to become a shiny new conservative talking point. Here’s the inevitable headline: 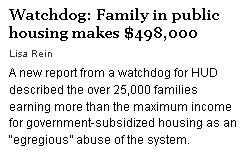 In a nutshell, the story behind this is pretty simple: HUD checks your income when you apply to live in subsidized housing, but they never check it again. Most people who climb up the income ladder move out anyway because they want to live someplace nicer, but a few don’t. And of those few, a very few make really large amounts of money.

HUD tweaked its policy on high-earning tenants in 2004, encouraging the thousands of housing authorities in the system to move families out of public housing if they earn more than the income limit for their area. While HUD gives money to the housing authorities, they’re run by states and local governments.

But the 15 authorities investigators looked at told them they had no plans to evict these families, because if they did, poverty would continue to be concentrated in government-subsidized housing. The goal, they said, was to create diverse, mixed-income communities and allow tenants who are making good money to serve as role models for others.

Okey doke. The programs are actually run by the states. And the states unanimously allow over-income families to stay because they think it has a positive impact on the housing projects.

As usual, then, once you read past the click-bait headline, the actual story turns out to be considerably less inflammatory than it seems. HUD encourages states to kick out over-income families, but doesn’t require it. The states prefer to keep them, and for a seemingly good reason. And if you limited yourself to kicking out just the “egregious” cases in the blaring headline, you’d save only 0.03 percent of the budget.

Opinions may differ on this, but any way you look at it, it’s just not a big problem. The number of very high earners in public housing is minuscule, and it’s a pretty self-policing system since families that make half a million dollars mostly don’t want to stay in public housing anyway. More than likely, then, it’s probably best to ignore the whole thing and leave the program alone.

That’s not likely, though. I wonder who will be the first Republican candidate to make this a standard part of their stump speech?