Do you remember John Boehner’s House lawsuit against President Obama over some details of Obamacare? When it was finally unveiled, it turned out it had two parts. The first challenged a delay in implementing the employer mandate. That was a big meh. Even if the suit prevailed, it would be meaningless by the time it finished its trip through the court system.

But the second part was a surprise. It challenged the outlay of $175 billion as part of the Cost Sharing Reduction program, which pays out money to insurance companies and lowers premiums, primarily for the poor. Obama claims that 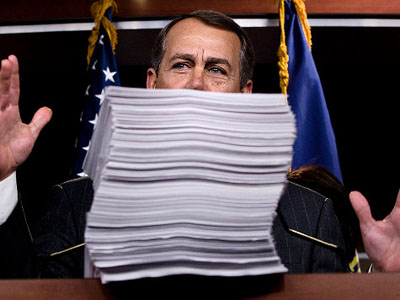 CSR is like Medicare or Social Security: a mandatory payment that doesn’t require yearly authorizations. Congress claims it does, and went to court to fight its case. So how is that going? David Savage of the LA Times gives us an update:

In May, U.S. District Judge Rosemary Collyer voiced exasperation when a Justice Department lawyer tried to explain why the Obama administration was entitled to spend the money without the approval of Congress. Why is that “not an insult to the Constitution?” Collyer asked.

But the more formidable barrier now facing the lawsuit is a procedural rule. Judges have repeatedly said lawmakers do not have standing to re-fight political battles in court….But in late June, the high court gave the House lawsuit an apparent boost when it ruled the Arizona Legislature had standing to sue in federal court to defend its power to draw election districts….Ginsburg in a footnote said the court was not deciding “the question of whether Congress has standing to bring a suit against the president.” But administration supporters acknowledge the high court’s opinion in the Arizona case increases the odds the suit will survive.

….Washington attorney Walter Dellinger, a former Clinton administration lawyer, believes the courts will not finally rule on the House lawsuit. “There has never been a lawsuit by a president against Congress or by Congress against the president over how to interpret a statute,” he said.

If the courts open the door to such claims, lawmakers in the future will opt to sue whenever they lose a political battle, Dellinger said. “You’d see immediate litigation every time a law was passed,” he said.

In other words, this is starting to look an awful lot like King v. Burwell: a case that initially seemed like an absurd Hail Mary by conservatives, but that eventually started to look more formidable. In the end, King still lost, but not before plenty of liberals lost a lot of sleep over it.

I think that’s still the most likely outcome here. Allowing Congress to sue the president would be a huge reversal for the Supreme Court, and it’s not clear that even the conservatives on the court want to open up that can of worms.

But there’s more to this. If the Supreme Court rules that Congress has no standing to sue, but it looks like they might treat the case sympathetically on the merits, conservatives merely have to find someone who does have standing to sue. That probably won’t be too hard. It may take years, but one way or another, this might end up being yet another legal thorn in the side of Obamacare.