Via someone on the right (I don’t remember who, sorry) I learned of a minor tempest over at Vox.com. One of their editors asked a Swedish philosopher, Torbjorn Tannsjo, to write a piece defending the “repugnant conclusion,” which Tannsjo describes thusly:

My argument is simple. Most people live lives that are, on net, happy. For them to never exist, then, would be to deny them that happiness. And because I think we have a moral duty to maximize the amount of 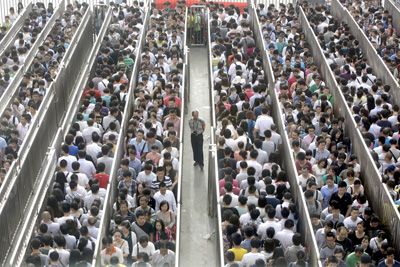 happiness in the world, that means that we all have an obligation to make the world as populated as can be.

There are a number of caveats in the piece, but that’s basically it. Vox ended up rejecting it, partly because they decided not to launch a planned new section for “unusual, provocative arguments,” and partly because they were squeamish about the implications of a piece which argued that “birth control and abortion are, under most circumstances, immoral.”

Brian Leiter, a professor of law and philosophy at the University of Chicago, was appalled:

If you solicit a piece from a philosopher, knowing what their work is about (as was clearly the case here), you have an obligation to publish it, subject to reasonable editing. What you can’t do, if you are an even remotely serious operation (and not an echo chamber), is reject it because someone not paying attention might think the argument supports a conclusion they find icky.

I’ll confess to some puzzlement about this affair. Leiter is right that Vox editors must have known exactly what Tannsjo was going to write. That was clear from the start. So why did they get cold feet after seeing the finished product? On the other hand, Leiter is dead wrong that any publication has an obligation to publish every piece it solicits.1 That doesn’t pass the laugh test, whether the writer is a philosopher or not. Stuff gets rejected all the time for a million different reasons, potential offensiveness among them.

But here’s the part I really don’t get: Why on earth would anyone take Tannsjo’s argument seriously in the first place? The entire thing hinges on the premise that we all have a moral duty to maximize the absolute amount of felt happiness in the universe. If you don’t believe that, there’s nothing left of his essay.

But virtually no one does believe that. And since Tannsjo never even tries to justify his premise, that makes his entire piece kind of pointless. It would have taken me about five minutes to reject it.

I dunno. Too many modern philosophers seem to revel in taking broadly uncontroversial sentiments—in this case, that we have an obligation to future generations—and then spinning out supposedly shocking conclusions that might hold if (a) you literally care only about this one thing, and (b) you take it to its absurd, ultimate limit.2 But aside from dorm room bull sessions, why bother? That just isn’t the human condition. We care about lots of things; they often conflict; and we always have to end up balancing them in some acceptable way. Nothing in the real world ever gets taken to its ultimate logical conclusion all by itself.

I suppose this kind of thing might be interesting in the same way that any abstract logic puzzle is interesting, but it’s not hard to see why most people would just consider it tedious blather. If this is at all representative of what Vox got when it started looking around for unusual, provocative arguments, I don’t blame them for deep sixing the whole idea.

1Depending on the publication and the type of article, they might owe you a kill fee for the work you put into it. But that’s all.

2Well, that and ever more baroque versions of the trolley problem.