WRAP-UP: Marian, who seems to be more in touch with the common man than I am, thinks Rubio was the winner tonight. He seemed fine to me: plenty conservative, but also serious and wonkish. But the big winner? I’m not sure.

So who was? I don’t think there was a big breakout. But I do think there were two losers. First, Donald Trump. His schtick might be entertaining in small doses, but when you hear it repeatedly in response to question after question, it just seems juvenile. This was just not a good format for his brand of performance art.

The second loser was Walker. Not because he made any big mistakes, but because he didn’t really do anything to break out, and he needed to. This is not a huge deal: I don’t think he did himself any real harm, and there are plenty more debates to come. But he needs to up his game.

Jeb Bush was very presidential sounding, but mostly treaded water. For him, though, this isn’t so bad. Unlike Walker, I don’t think he really had to do any more than that.

Tonally, this debate was like night and day compared to the earlier debate. There was plenty of skirmishing, plenty of barbs, and much more energy. The actual substantive disagreements—Rand Paul aside—were pretty slight, but the candidates made the most of them.

There weren’t a whole lot of memorable zingers. Even Trump seemed off his game, even defensive at times (when he was asked about his contributions to Hillary Clinton, for example). Walker had his bit about Hillary’s email 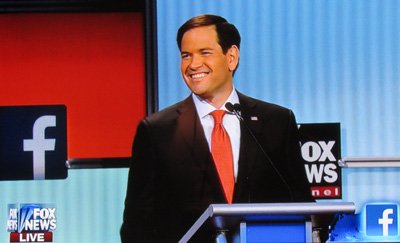 server, but it sounded too robotic to draw blood. Still, I’m sure it will get plenty of cable news air time, since there wasn’t a lot of competition. Mostly, I suspect the bits that will be on a 24/7 loop are the direct arguments between the candidates.

Summary: Trump and Walker probably lost a little ground. Maybe Christie too. Rubio gained a bit of ground. Bush stayed even. The rest probably will stay about where they are, which is so low that it hardly matters if they gained or lost a percentage point.

Prediction: Someone will drop off the top ten, and Carly Fiorina will be on the big stage next time. Personally, I think she did well, but not great. (Maybe because I live in California and remember her Senate run in 2010.) But the media seems to have decided very quickly that she did superbly. That will be enough to give her a bump in the polls.

First off, I want to apologize if anyone gets seasick from the graphic at the top of this post. Sometimes politics requires sacrifices, I’m afraid. And I have to look at it too.

10:54 – Megyn Kelly is asking about God. But someone apparently came up during the commercial break to ask about veterans. So now she asks Rubio what he thinks about God and veterans. Kinda falling off the rails here.

10:41 – Walker on recent cyberattacks: “It’s sad to think about, but probably the Russian and Chinese governments know more about Hillary Clinton’s email server than do the members of the United States Congress.” Zing! It got good applause, but wasn’t that a little too obviously a preplanned zinger?

10:37 – An Iranian general visited Russia. What would Trump do in response? No answer, but it would be totally different from what Obama is doing. BTW: the part of the Iran deal that Trump doesn’t like involves 24-day notice for inspections. Trump twice called it 24-hour.

10:35 – Walker gives a total non-answer about #BlackLivesMatter and civil rights.

10:32 – Kasich gets a surprising amount of applause when he gives a fairly tolerant answer about gay marriage.

10:31 – Trump’s defense of his big mouth: People’s heads are getting cut off. We don’t have time to be nice.

10:29 – Megyn Kelly asks Trump, “When did you actually become a Republican?” Trump says he has evolved. “You know who else evolved? Ronald Reagan.” Well, true enough.

10:26 – Rubio says he has never advocated a rape or incest exception to a ban on abortion. Is this true?

10:24 – Huckabee says “Iran got everything, we got nothing” from the Iran deal. With the exception of stopping Iran’s nuclear program for at least a decade, I suppose that’s true.

10:20 – Walker: We need to kill the Iran deal, put in place even more crippling sanctions, and then persuade our allies to go along. And how will we manage that? Crickets.

10:16 – Trump: Only four out of hundreds of his companies have gone bankrupt. So there. By the way, “this country, right now, owes $19 trillion, and they 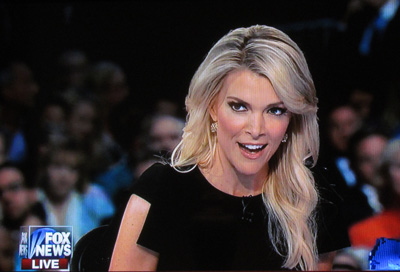 need someone like me to straighten out that mess.” Big applause. Crikey.

10:12 – Huckabee says his consumption tax is great because it will tax “illegals, prostitutes, pimps, drug dealers,” who are all freeloading off the system right now. Um….

10:11 – Christie: “I’m the only guy on this stage who’s put out a 12-point plan on entitlements.” Unsurprisingly, this got no applause. I guess 12-point plans aren’t what they used to be.

10:10 – Walker has exactly the same economic plan as Bush!

10:07 – How will Bush get 4% growth? Answer: lift our spirits, fix the tax code, get rid of regulations, repeal Obamacare, build the XL pipeline, fix the immigration system.

10:04 – Ben Carson doesn’t think Hillary Clinton will be the Democratic nominee. I wonder who he’s betting on?

9:51 – Trump says he gives money to lots of politicians because he gets favors in return. “I give to everybody. When they call, I give. And you know what, when I need something from them two years later, three years later, I call them and they are there for me.” So how about Hillary Clinton? What did he get from her? “I said, be at my wedding, and she came to my wedding. And you know why? Because she had no choice.” Ha ha ha. I wonder how long it takes before this routine gets old even with his supporters?

9:50 – Trump is asked why he supported single-payer health care 15 years ago but doesn’t anymore. He says it’s because 15 years ago was a different era. Huh? Word salad follows.

9:49 – Asked about health care, Trump says he was against the Iraq war. Okey dokey.

9:45 – Bush: “We need to take out ISIS with every tool in our arsenal.” That’s all the detail we get from Bush.

9:37 – Chris Christie wants more surveillance, not less. Rand Paul supports the Bill of Rights. Christie: “When you’re sitting in a subcommittee blowing hot air, you can say anything you want.”  Paul: “I don’t trust President Obama with our records. I know you gave him a big hug. If you want to give him a big hug again, go right ahead.” Christie: “The hugs I remember are the hugs I got after 9/11.” Megyn Kelly finally steps in and breaks up the fight.

9:36 – Well, everyone is opposed to illegal immigration.

9:31 – No one really wants to criticize Trump for saying illegal immigration is all due to the fact that our government is stupid.

9:26 – Chris Wallace wants to know if Trump has any specific evidence that the Mexican government is sending criminals over? Trump says that “border patrol people that I deal with, that I talk to, they say this is what’s happening, 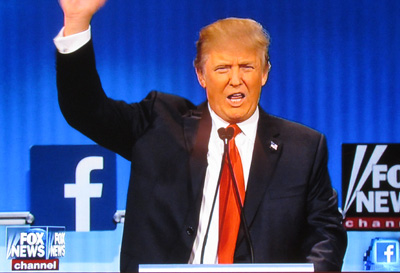 because our leaders are stupid.” The Mexican government is much more cunning than ours. “That’s what’s happening whether you like it or not.”

9:25 –Trump seems to think that Republicans didn’t really care about illegal immigration until he came along. Um….

9:20 – Rand Paul: “We didn’t create ISIS. ISIS created ISIS.” Roger that. Then Paul suggests that the way to beat ISIS is to stop funding their allies. I’m not sure what he was getting at with that.

9:18 – Huckabee thinks the next president should just ignore the Supreme Court and ban abortion. Again, huh?

9:17 – Scott Walker defends his opposition to a life-of-the-mother exception for abortion because there are always ways to protect the mother. “That’s been proven.” Huh?

9:11 – Megyn Kelly wants to know why Trump insults women so much. Trump is Trump in response. He’s kidding! He’s having fun. America’s problem is too much political correctness. That’s ridiculous when America is losing to everyone—everyone!—and needs to be made great again. If you don’t like it, tough.

9:04 – First question: a handraising question. Is anyone unwilling to pledge to support the eventual nominee? Only Trump raises his hand. He’s not willing to make the pledge unless he’s the nominee.

8:55 – To my surprise, Carly Fiorina has been anointed the big winner of the happy hour debate. I can see the case for her being the winner by a bit—she was competent and on message and made no mistakes—but not by a landslide. But apparently the punditocracy has spoken. Fiorina is ready for the big show.