A couple of days ago Karen DeYoung of the Washington Post wrote a long, interesting piece about Obama’s National Security Council. The basic story was simple: the NSC under Obama has gotten too big, too sclerotic, and has centralized foreign policy too much in the White House. It was enlightening, and yet….it seemed familiar. Like I’d read it before. Maybe during every presidential administration of my adult life.

But I wasn’t sure, since this stuff isn’t really in my wheelhouse, so I didn’t write about it. However, this stuff is very much in Dan Drezner’s wheelhouse, and he agrees: “There’s not a whole lot that’s different in these complaints from past ones, except that the Obama White House has probably been more successful at 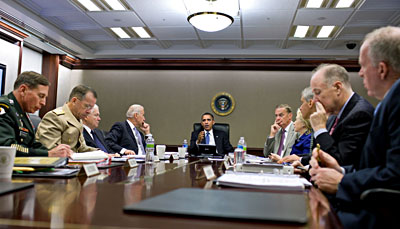 centralizing foreign policymaking authority than the prior two administrations.” Still, he did find at least one new thing under the sun:

Reading through her story, there are two things that stand out — one that’s old and one that’s new. The old complaint is that agencies and staffers who don’t get their policy preferences enacted are, shockingly, not thrilled with the policy process. And everything I have heard from White House staffers about President Obama suggests that in recent years the NSC process has produced policy options that are far more hawkish than his own policy preferences. So he swats them down, and underlings get grumpy.

The new complaint is the reason behind the NSC’s micro-management of foreign policy: fear of political fallout.

“Benghazi is a good example,” the former official said, “and . . . Ebola. That can’t just be left to CDC and State and others to manage. No. You have to have a czar and a whole team of people. And why is that? Because the politics on this issue have become so much more corrosive and challenging that it’s a natural instinct for the White House to say, ‘We’ve got to have an eye on this. On everything.’ ”

So the question is: Is political fallout really more toxic than it used to be, or are modern White Houses just more sensitive to it? And if the fallout really is more toxic, why? Is it because politics is genuinely more toxic nowadays, or because modern media magnifies and accelerates it?

So if the modern era isn’t uniquely toxic, why is foreign policy becoming ever more centralized? Partly because everything is. The modern White House controls policy of all kinds far more than in the past, while cabinet departments have steadily lost influence over the past half century.

Beyond that, I think it’s the media environment that’s driven a lot of the recent centralization. There’s just too damn much of it. And it’s endless. It’s on cable TV, it’s on blogs, it’s on social media, it’s on talk radio, it’s on email chains—and you can lose control of a situation in the blink of an eye. All media, from the New York Times down to the dumbest daily email blasts, thrives on the latest shiny toy. And if something catches on, it can take off literally in hours. You might not even realize it’s gathering steam until it blows up and becomes 24/7 cable news fodder. It’s nearly impossible to react to that kind of feeding frenzy, and it’s completely impossible if decisionmaking is decentralized. Your only faint hope is to have your team in the White House obsessively monitoring this stuff and able to react almost instantly.

This is a bad thing. In the same way that Wall Street trading has gotten too fast and too complex for humans to effectively control, so has political life. Good decisions simply can’t be made in minutes or hours. And yet, they have to be. Obviously this increases the risk of bad decisions, but it also increases the defensive, circle-the-wagons approach of modern administrations, which seem to be perpetually at war with the press.