Pacific Standard reports today on a recent study about learning math, but I think they bury the lede. “New research finds that when parents with math anxieties try to help their kids, their efforts could backfire,” says the headline. But here’s the text:

Remarkably, the more that math-anxious parents helped their kids with their homework, the worse the kids did on end-of-year math tests, an effect that in the worst cases cut students’ progress in math nearly in half. Meanwhile, among low-anxiety parents, the team found that parents helping their children with math homework had little to no effect on the kids’ test scores. That effect remained even after controlling for parents’ education levels, teachers’ math anxiety and ability, and other factors, such 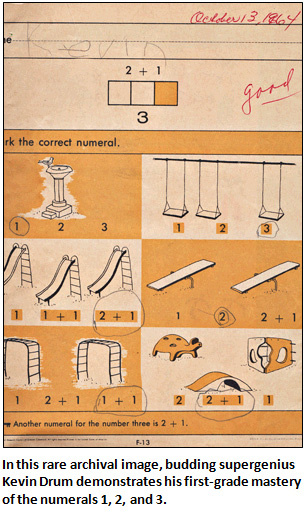 as a school’s socioeconomic status—a good indication that parents were passing their arithmetic-specific anxieties on to their kids.

In other words, forget about whether you have math anxieties or not. Don’t help your kids with their math homework, full stop. At worst, you’ll screw them up. At best, you’ll do nothing. Use the time for something more constructive, like cutting your fingernails or watching Judge Judy.

Anyway, while we’re on the subject, here’s a math story from my childhood that backs up the results of this study. I guess this would have been around first or second grade. I must have asked my father some question or another, and the upshot was that he told me about negative numbers and how one arrived at them. Some time later, I was filling out an arithmetic workbook at school, and one of the problems was something like “What is 2 – 3?” I wrote in -1, probably feeling kind of smug, and got marked down. I protested to no effect. I was supposed to say that there was no answer because you can’t subtract a bigger number from a smaller one. Thanks a lot, dad!

Is this story true? I don’t know. I swear I remember it, but it sounds kind of unlikely, doesn’t it? Maybe it’s just a trick of memory? Could be, but it’s an odd thing to invent out of whole cloth. In any case, my father is no longer around to protest his innocence, so we’ll never know for sure.