Something is awry at the Rand Paul campaign. The main super PAC supporting his presidential bid raised just $3.1 million in the first half of 2015….On Sunday, a new NBC News/Marist poll showed support for the Kentucky Republican declining to just 4 percent in New Hampshire (compared with 14 percent in February). 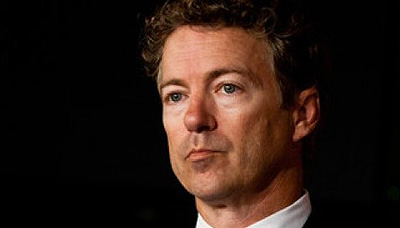 Enten’s question: “What’s Wrong With Rand Paul’s Campaign?” I think we all know the answer.

Rand’s father, Ron Paul, always attracted a fair amount of money and a fair amount of steady support. Not huge amounts, but respectable. The reason was that he was never seriously running for president. He just liked having a stage for his ideas, and since he wasn’t trying to win, he could stay as true to his libertarian beliefs as he wanted. He had no need to waffle.

But son Rand has bigger plans. He is seriously running for president, and that means he has to pay attention to the aspects of his political views that just aren’t going to play well with important blocs of Republican voters. From the start he was never quite as pure a libertarian as dad, but now he’s discovering that he can’t even be as pure a libertarian as he’s been in the past. So he waffles. He changes his views. He spends time looking at polls. He worries about saying things that will piss off the white evangelicals, or the elderly, or the pragmatic business set. The result is that the folks who admired him for his principled libertarianism are dropping him, while the rest of the Republican Party has yet to warm up to him. After all, he is the guy who said the ongoing chaos in Iraq was the fault of the Republican president who started the Iraq War, not Barack Obama. He’s also the guy who wanted to eliminate aid to Israel. And he’s the guy who wanted to gut Medicare for everyone—even the folks currently receiving it.

He’s kinda sorta changed his mind on all these things, but that makes him look like a sellout to the libertarian crowd and a opportunistic panderer to the tea party crowd. Is it any wonder his poll numbers have tanked?