Zack Beauchamp points to a valuable piece in Foreign Affairs today about the Iran nuclear negotiations. In it, Dalia Dassa Kaye reminds us that failure wouldn’t just mean a return to the status quo that existed before talks began. It would, instead, almost certainly lead to conditions on the ground that are far more dangerous than they were before we even started:

The first and most dangerous scenario is that Tehran could break out of the interim nuclear agreement, the Joint Plan of Action, which has essentially frozen Iran’s nuclear program for nearly two years. With no promise of lasting and more significant sanctions relief, Iran may decide to resume its nuclear enrichment program at levels that reduce the time it would need to weaponize its nuclear program.

….To make matters worse, unless it is clear that Iran is at fault for the breakdown in nuclear talks, the current broad international support for sanctions against Iran could weaken….Key international powers, and even some in Europe, may tire of self-imposed restrictions, especially if Iran appeared to have negotiated in good faith. So, Iran could find itself less isolated over time, especially if Congress rejected the deal, leaving the United States to blame for the failure. Indeed, this is the worst-of-both-worlds outcome—few constraints on Iran’s nuclear program and dissipating international pressure on Iran.

A return to military escalation with Iran is also more likely in a no-deal Middle East. Iranian hardliners’ arguments that the West was never really interested in a deal with Iran will appear 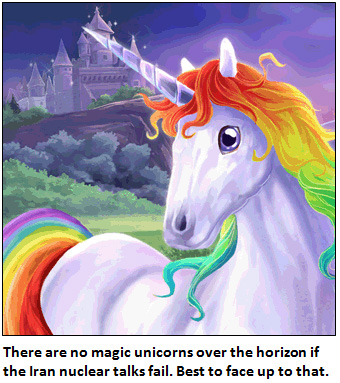 vindicated….This could lead to an expansion of Iran’s already destabilizing regional activism, particularly in Iraq, Syria, and in its relationship with Hezbollah.

As Beauchamp points out, sanctions against Iran were never going to last forever, either with or without a deal. That’s just real life when an effective sanctions regime requires the cooperation of dozens of countries, including some who have iffy relationships with us in the first place, like China and India, and others who simply aren’t willing to play along forever in a losing cause, like Japan and South Korea. So the question is whether to let the talks fail, in which case the sanctions will almost certainly crumble in as little as a year or two, or to strike a deal, in which case the sanctions will go away but we’ll get something in return.

The alternative is to let the talks fail and then restart them in search of a better deal. But this is a fantasy. If these talks fail, there aren’t going to be new talks. What will happen is that sanctions will slowly decay and Iran may well decide it no longer has any incentive to halt its nuclear weapons program. If you’re willing to deal in the grown-up world, rather than the fantasy neocon world, those are your choices. Go ahead and take your pick—but don’t pretend there are magic unicorns just over the horizon if only we showed a little more toughness. There are no unicorns.