The Earned Income Tax Credit has long been one of the wonk’s favorite poverty-fighting tools. It’s a tax credit available only to those who work, so it works as a powerful incentive to find employment. It also acts as a subsidy for low-paying jobs, which are often the only ones that the poor can find. And the money comes from the government, so it doesn’t distort labor markets or meet resistance from employers, as the minimum wage does. 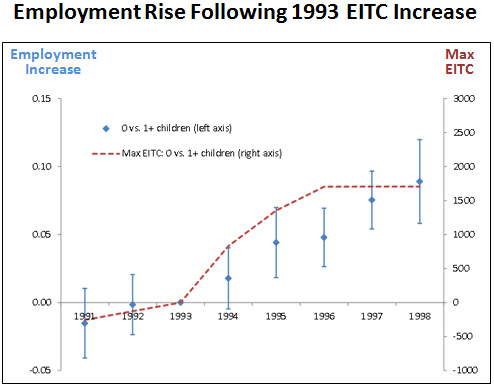 Today, Dylan Matthews points to an interesting new paper suggesting that the EITC is even better than we thought. Take a look at the chart on the right, which shows what happened after the 1993 EITC increase. It’s focused on single women with children, the biggest beneficiaries of the EITC. The red line shows how benefits increased for mothers with children compared to women without children: the difference is about $1,700. The blue dots (with error bars) show the difference in employment. By 1998, employment among mothers with children had gone up about 8 percent compared to women without children. Quite clearly, the EITC subsidy was a big incentive for mothers to find jobs.

It’s the combination of these effects—more employment and the direct effect of the tax credit—that makes EITC a more powerful poverty fighter than previously thought.

So why not extend the EITC to cover more people (men, women, the childless, the very poor, etc.) and make it more generous, instead of focusing on raising the minimum wage? Virtually every serious economist on both left and right would support this. Some might have different kinds of wage subsidies they like better, but all of them prefer the EITC to the minimum wage.

The answer, of course, is that the minimum wage is paid by employers. The EITC is paid by the government. Therefore it has to be funded by the government. And that means either raising taxes to cover the cost, or else slashing some other social program. Republicans refuse to do the former and Democrats refuse to do the latter. In the latest round of this game, both Paul Ryan and Barack Obama agree that the EITC should be increased, but neither is willing to accept the other’s funding proposal. Matthews provides the gory details:

Because Obama and Ryan both fund their plan in ways that are totally unacceptable to the other side, they haven’t come to a deal to pass this plan. Obama would pay for the expansion by raising taxes on hedge fund managers and rich self-employed people, while Ryan would cut other safety net programs and “corporate welfare,” which is this case means specifically energy subsidies the Obama administration likes. Ryan has explicitly rejected Obama’s funding mechanism, and it’s hard to imagine Obama accepting Ryan’s.

So we have a stalemate, even though both Ryan and Obama and practically everyone else believe an increased EITC is one of the most effective anti-poverty tools we have. What’s worse, outside the wonk world the EITC has been losing ground among Republican politicians for decades. It’s now generally viewed by the tea party set as just another giveaway to the moochers and takers, culminating in the widespread belief during the 2012 campaign that the poor ought to pay more taxes, not less. More on this grubby history here.