Even granting that I haven’t followed the TPP treaty debate all that closely, the latest maneuvering to get it passed is a little puzzling. As you may recall, the original strategy was to pair up TPA, which most Democrats oppose, with TAA, which most Democrats like, in hopes of attracting enough Democratic votes to pass the whole package. With these preliminaries out of the way, Congress could then vote on TPP itself. It didn’t work. Dems voted heavily against TAA 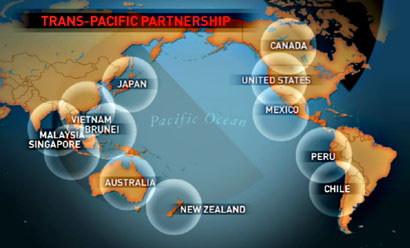 because they knew it would sink TPA too. So what’s next?

Hold on. That probably barely sounded like English to some of you. Here’s an acronym primer:

TPP = Trans Pacific Partnership, a trade treaty between the United States and a bunch of other countries around the Pacific Rim. It’s been under negotiation for years and will be ready for a ratification vote soon.

TPA = Trade Promotion Authority, aka “fast track.” This comes before the TPP vote, and guarantees that the treaty text will be submitted to Congress for an up-or-down vote with no amendments allowed. Without it, the treaty is dead, since obviously all the other countries won’t allow the US to unilaterally makes changes.

TAA = Trade Adjustment Assistance. Trade agreements with poor countries often lead to job losses in the US, as jobs get moved overseas. TAA is a laundry list of measures designed to help workers who lose their jobs because of the treaty, and it’s supposed to make trade treaties more tolerable to organized labor. It very decidedly failed to do so this time.

Now go read the first paragraph of this post again.

Right. So where were we? Oh yes: The TPA+TAA package bombed with anti-treaty Democrats, and it needed at least a few Democratic votes to pass. So what’s next?

On Thursday the House will vote on just the fast-track portion—also known as Trade Promotion Authority, or TPA—on the understanding that the workers’ aid would be approved later.

Hmmm. TPA actually passed the House last week, even though TAA had already been voted down earlier in the day. So I guess the idea here is that pro-treaty Democrats will vote for TPA as a standalone bill too. I mean, if they were willing to vote for it last week after TAA had been defeated, why not vote for it this week with no TAA? Following that, it’s just a matter of sending the standalone TPA bill to the Senate and finding out if a few Democrats there will still vote for it even without TAA.

It’s all a little weird and desperate, but it might work. Republicans are swearing that if TPA passes, they’ll bring up TAA for a vote later, which is supposed to appease Democratic concerns about job losses. Dems only voted against TAA in order to kill TPA, so if TPA has already passed there’s no longer any reason for them to vote against TAA.

Of course, even if Republicans allow a vote on TAA, it also needs a few Republican votes to pass, and the problem here is the opposite: Republicans have little reason to vote for TAA once TPA has already passed and there’s no longer any need to appease Democrats. But Democrats can’t pass it alone. They need some Republican votes too. So do they trust the GOP leadership to deliver those votes?

Jesus. What a rat’s nest. If you didn’t understand any of that, try reading it again. And then again. If it still doesn’t make sense, just forget the whole thing and eat a quart of ice cream. You’ll be better off.