I’ve been talking up Scott Walker as a good bet to win the Republican presidential nomination next year, but there’s no question that he first has to find the right balance between the bullheaded “Hulk Smash Democrats” persona designed to appeal to tea partiers and the more mild-mannered Midwestern executive persona designed to appeal to moderates and big-money donors. The latest example of his difficulties with this balancing act comes from a laughable attempt to change the mission statement of the University of Wisconsin. Here’s Walker’s proposal:

The mission of the system is to develop human resources to meet the state’s workforce needs, to discover and disseminate knowledge….

So far, no problem. He just wants to add a bit of boilerplate about training future workers. No one objects to that. But then there’s more. Everything he wants to delete is in bold:

….to extend knowledge and its application beyond the boundaries of its campuses and to serve and stimulate society by developing develop in students heightened intellectual, cultural, and humane sensitivities, scientific, professional and technological expertise, and a sense of purpose. Inherent in this broad mission are methods of instruction, research, extended training and public service designed to educate people and improve the human condition. Basic to every purpose of the system is the search for truth.

By cracky, we’ll not have our universities extending knowledge beyond the borders of their campuses! And the search for truth? Sounds like a steaming pile of secular liberal claptrap. Off with its head!

But that’s not the end of it. Heather Digby Parton describes what happened next:

After the changes were revealed publicly Walker made a hilariously fatuous claim worthy of Rosemary Woods and the 18 minute gap: somehow those changes just appeared and he didn’t know nothin’ about how they got there and anyway 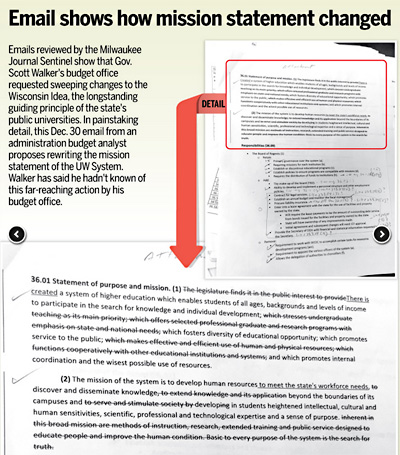 it was the University’s fault for “overlooking” it. He has had to backtrack from that as well, admitting that his people did make these changes and the university official argued vociferously against it. But none of it is his fault because well, it just isn’t. Or anyone else’s.

Last Wednesday, according to the Milwaukee Journal-Sentinel, Walker finally acknowledged that university officials had raised objections about the proposal but “had been told the changes were not open to debate.” And as the Sentinel graphic on the right shows, the proposed changes were, in fact, quite deliberate.

In any case, even Walker is now being forced to pretend it was all a big misunderstanding. So what happened? My guess is that his inner circle thought the changes might win Walker some brownie points with the tea party crowd, which has always been suspicious of long-haired academics and their lefty ideas, but failed to see how bad it would look among the less wild-eyed crowd that looks to Walker as a pragmatic executive type. Walker’s team is having trouble balancing those two constituencies, and that’s a problem since Walker’s key appeal is that he bridges the gap between them.

Needless to say, this dumb little affair won’t do Walker any long-term damage. It’s just a minor dust cloud. Nonetheless, it’s an instructive dust cloud. Clearly Walker still hasn’t quite managed to polish up the balancing act that’s his biggest source of strength in the 2016 presidential race. That’s something he needs to figure out in short order.