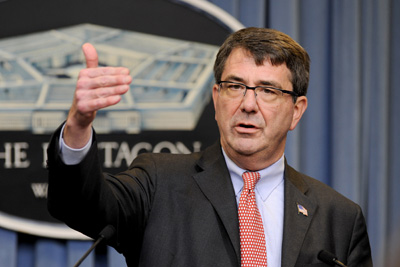 Here’s the latest on Ukraine:

Ashton B. Carter, President Obama’s choice to become his fourth secretary of defense, said Wednesday that he was “very much inclined” to provide arms to Ukraine to fend off Russian-backed rebels, something the White House so far has resisted.

“We need to support the Ukrainians in defending themselves,” Carter said at his Senate confirmation hearing….“I am inclined in the direction of providing them with arms, including . . . lethal arms,” he said.

Needless to say, it’s unlikely Carter would say this publicly without at least some level of blessing from the White House. This is pretty plainly a signal from President Obama that he’s thinking about changing his policy toward Ukraine.

I’m noting this without comment because, frankly, I’m not sure how I feel about it. But I will say at least one thing: this is harder than it sounds. “Arming our allies” always sounds like a nice middle ground for armchair generals in Congress—nestled safely in between economic sanctions (weak!) and boots on the ground (war with Russia!)—but weapons are useless without a trained army to use them. And right now Ukraine barely has an army worth the name.

Generally speaking, providing arms is a very long-term strategy. We have to get the arms over to Ukraine. We have to train the Ukrainians to use them effectively. The Ukrainian army needs to up its game. This takes at least a year, and probably a good deal more. In the meantime, the risk is that Russia will react to the flow of arms by deciding that it needs to stop pussyfooting around and just send in its own troops before it’s too late.

Unfortunately, Ukraine has been an inept kleptocracy for over a decade, and that makes them a lousy ally. We can provide them with arms pretty easily, but training them to use those arms effectively is a whole different story. We learned that in both Iraq and Afghanistan over the past decade, and if we go down this road we might just learn it all over again in Ukraine.