Politico’s Ken Vogel reports on a phenomenon that’s gotten a fair amount of attention on both the right and the left:

Since the tea party burst onto the political landscape in 2009, the conservative movement has been plagued by an explosion of PACs that critics say exist mostly to pad the pockets of the consultants who run them….A POLITICO analysis of reports filed with the Federal Election Commission covering the 2014 cycle found that 33 PACs that court small donors with tea party-oriented email and direct-mail appeals raised $43 million — 74 percent of which came from small donors. The PACs spent only $3 million on ads and contributions to boost the long-shot candidates often touted in the appeals, compared to $39.5 million on operating expenses.

….[Democrats] have mostly avoided the problem, though they also benefit from the lack of tea party-style insurgency on their side. That could change if the 2016 Democratic presidential primary inflames deep ideological divisions within the party. But on the right, this industry appears only to be growing, according to conservatives who track it closely.

And this problem isn’t limited just to consultants who set up PACs to line their own pockets. Media Matters reports that right-wing outlets routinely tout—or rent their email lists to people touting—all manner of conspiracy theories 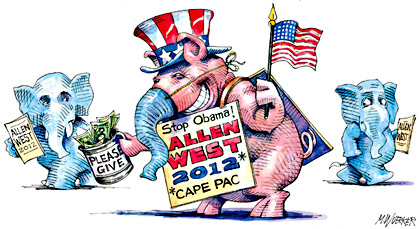 and out-and-out frauds. Here’s an excerpt from Media Matters’ list:

More here. So here’s my question: why is this so much more common on the right than on the left? It would be nice to chalk it up to the superior intelligence of liberal audiences and call it a day, but that won’t wash. There’s just no evidence that liberals, in general, are either smarter or less susceptible to scams than conservatives.

One possibility is that a lot of this stuff is aimed at the elderly, and conservatives tend to skew older than liberals. And while that’s probably part of the answer, it’s hardly satisfying. There are plenty of elderly liberals, after all—certainly enough to make them worth targeting with the same kind of fraudulent appeals that infest the right.

Another possibility is that it’s basically a supply-side phenomenon. Maybe liberal outlets simply tend to be less ruthless, less willing to set up scam fundraising organizations than conservative outlets. In fact, that actually does seem to be the case. But again: why? Contrary to Vogel’s lead, this kind of thing has been a problem on the right for a long time. It definitely got worse when the tea party movement created a whole new pool of potential patsies, but it didn’t start in 2009. It’s been around for a while.

So then: why is this problem so much bigger on the right than on the left? I won’t be happy with answers that simply assume liberals are innately better people. Even if they are, they aren’t that much better. It’s got to be something institutional, or something inherent in the nature of American conservatism. But what?