Atrios has a New Year’s wish:

My hope is that the tide continues to turn (it has, I think, if slowly) against the mass incarceration project this country has been engaged in for decades. It isn’t that I wasn’t aware of it as a problem before, it’s that I now have a much greater sense of how it’s the nexus of a whole system of racist horror. Let’s fix it.

This is a very reasonable wish. It’s important to realize that the huge boom in prison construction and mandatory sentencing laws of the 70s and 80s was a response to a real thing: the massive increase in violent crime during the 60s and 70s. It’s almost a certainty that we overreacted to that rise in crime and incarcerated too many people in response. Still, it wasn’t just an irrational panic. Violent crime really did skyrocket 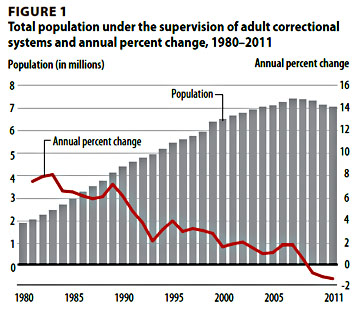 during that era, and fear of victimization was both palpable and legitimate. That made a big increase in the prison population inevitable.

Needless to say, that’s changed. Violent crime has plummeted by an astonishing amount in the past two decades. It takes a long time for public perception to catch up to changes like this, but it does catch up eventually—and as the fear of crime eases, the lock-em-up mentality of 40 years ago has started to ease along with it. In addition, there are simple demographics at work: if there’s less crime and fewer arrests, there are simply fewer criminals to lock up. Long sentences from an earlier era have kept prison populations high despite this, but eventually even that has begun to fade away.

In other words, in the same way that mass incarceration surged because of a real thing, it’s finally starting to ebb because of a real thing: the actual, concrete decline in violent crime that started in the early 90s and which appears to be permanent. America is simply a safer place than it used to be, and looks set to stay that way.

Our prison population is still gigantic by any measure, and there are vast inequities in who gets locked up and how they get treated. But for those of us who’d like to see this problem addressed, at least there’s a decent tailwind helping us out. It’s not crazy to think that the next decade could see some real changes in the American attitude toward the mass incarceration society we’ve constructed.