The United States might not have much leverage over North Korea, but China does. Virtually all of North Korea’s external trade is with China, and Chinese support is pretty much all that keeps North Korea from collapsing. 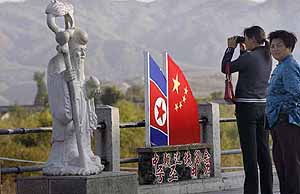 This means that when the United States wants to pressure Pyongyang, it has limited options as long as Chinese support of the regime remains strong. But how long will that support last? Over the weekend, Jane Perlez of the New York Times reported that it might finally be faltering:

When a retired Chinese general with impeccable Communist Party credentials recently wrote a scathing account of North Korea as a recalcitrant ally headed for collapse and unworthy of support, he exposed a roiling debate in China about how to deal with the country’s young leader, Kim Jong-un.

….The parlous state of the relationship between North Korea and China was on display again Wednesday when Pyongyang commemorated the third anniversary of the death of Kim Jong-il, the father of the current leader, Kim Jong-un, and failed to invite a senior Chinese official.

The last time a Chinese leader visited North Korea was in July 2013 when Vice President Li Yuanchao tried to patch up relations, and pressed North Korea, after its third nuclear test in February 2013, to slow down its nuclear weapons program. Mr. Li failed in that quest….After the vice president’s visit, relations plummeted further, entering the icebox last December when China’s main conduit within the North Korean government, Jang Song-thaek, a senior official and the uncle of Kim Jong-un, was executed in a purge. In July, President Xi Jinping snubbed North Korea, visiting South Korea instead. Mr. Xi has yet to visit North Korea, and is said to have been infuriated by a third nuclear test by North Korea in February 2013, soon after Kim Jong-un came to power.

So does this mean that China might help us out in our current dispute with North Korea over the Sony hack? Probably not—or not much, anyway. North Korea’s very weakness is also its greatest strength: if it collapses, two things would probably happen. First, there would be a flood of refugees trying to cross the border into China. Second, the Korean peninsula would likely become unified and China would find itself with a US ally right smack on its border. Given the current state of Sino-American relations, that’s simply not something China is willing to risk.

Not yet, anyway. But who knows? There are worse things in the world than a refugee crisis, and relations with the US have the potential to warm up in the future. One of these days North Korea may simply become too large a liability for China to protect. If that ever happens, North Korea’s lifespan can probably be measured in years or months.