We all heard yesterday that Sony Pictures made a last-minute decision to release The Interview on Christmas after all, thanks to pleas from a couple hundred independent theaters that agreed to defy Kim Jong-un and show it. So the honor of Western civilization is saved and everyone is happy. Right?

The film’s limited release drives a further wedge between Sony and the nation’s largest theater owners, who blame the studio for yanking away a potential hit. It was supposed to open on 3,000 screens before Sony and theater chains shelved the movie.

Theater owners are also upset that Sony is negotiating to release the movie simultaneously on a video-on-demand platform….“They could have 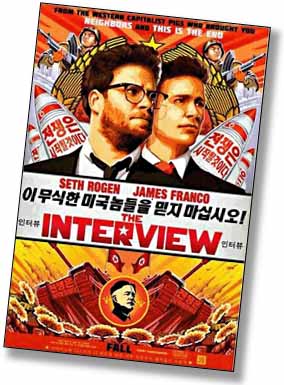 a full theatrical release. Instead they have a token,” said one theater executive who asked not to be identified because it could harm his relationship with the studio.

Wait. What? I thought this whole fiasco had been driven in the first place by the refusal of big theater chains to show the movie amid fears of terrorist retaliation. So what are they all griping about?

The disagreement over a digital release played into larger tensions between Sony and theater owners after hackers last week threatened physical harm on moviegoers who saw “The Interview.”….Worried about a potential threat, Sony said it canceled the movie after large chains backed away from the film.

But theater owners have been pointing the finger at the studio for originally giving them the OK to not run the film amid the threats. Then Sony blamed the nation’s four big theater chains for forcing the studio to cancel the original release….Representatives of Regal, AMC, Cinemark and Carmike declined to comment on the matter.

OK, I guess I’m officially confused. Did Sony cancel the Christmas release date of The Interview because malls and theater chains were desperate to back out of showing it? Or did malls and theater chains back out because Sony had implicitly urged them to do so when it gave the chains permission to break their contractual commitments to show the movie? Or are both sides now just furiously trying to shift blame after being called out for cowardice by everyone from George Clooney to President Obama?

The latter, I suppose. In any case, now I know what I want for Christmas: A country that doesn’t spin into a damn tizzy over every little thing. From Ebola to ISIS to the Sony hack, you’d think we were all at risk of losing our lives to outside forces every time we step off our front porches. In the immortal words of Aaron Rodgers, can we all please R-E-L-A-X?