Over at Foreign Affairs, Robert Litan has a piece lamenting the decline in entrepreneurship in America. I’m not entirely persuaded that this is a major problem—a fair amount of it is just the result of big national retailers replacing local diners and small shops, which are 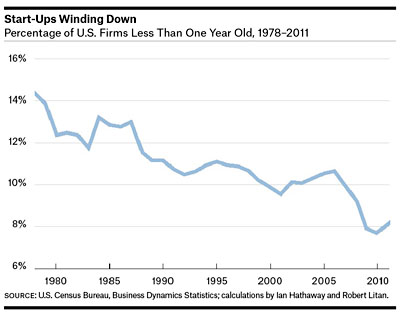 hardly big engines of economic growth—but I’m still willing to accept that some of it is probably real and deserves attention. The problem is what to do about it. James Pethokoukis, addressing skeptics like me, summarizes Litan’s suggestions:

Of course one can quibble with these numbers and what they mean….But here is the thing: Pretty much all the policy steps you might take to respond to this startup wind-down — and the decline in innovation and good jobs it implies — are pretty smart ideas in their own right. Among Litan’s suggestions:

Well….OK. But how far would this get us? #1 is something we already do better than anyone in the world. I suppose we could improve even further, and I’d be in favor of immigration legislation that does just that. Still, I guess I’m dubious that lack of smart immigrants is really a huge headwind in the US. Ditto for #2. Is lack of access to venture capital really a serious problem in this country? #3 is fine. I don’t know for sure just how hard it really is to start a business in America, but the World Bank ranks us 46th in the world, and I imagine we could do better. #4 is odd: Litan himself says the news here is “mostly good.” Obamacare makes it easier to change your job or start up a new business, and that’s inherent in its very nature. It will stay that way unless it’s completely repealed. Finally, #5 suggests that we do a better job teaching science, humanities, and the arts. Since that’s pretty much everything K-12 education does, this is just a way of saying we should keep trying to improve primary education. I don’t think anyone argues with that.

I don’t mean to come off too cynical here. There are two good ideas here that we could plausibly do something about: Being friendlier to highly-educated immigrants and making it easier to start a business. (A third idea—improving our schools—is also good, but it’s basically like endorsing motherhood and apple pie.) And a good idea is a good idea. But if entrepreneurship really is in decline in America—and if it’s truly a far-reaching problem—I’d be interested in hearing more about root causes and what we might be able to do about them. It seems like it will take a lot more than this list to seriously address it.