For two years, ever since Mitt Romney screwed up his response to the Benghazi attacks in order to score campaign points, Republicans have been on an endless search for a grand conspiracy theory that explains how it all happened. Intelligence was ignored because it would have been inconvenient to the White 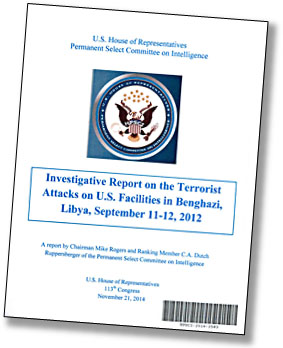 House to acknowledge it. Hillary Clinton’s State Department bungled the response to the initial protests in Cairo. Both State and CIA bungled the military response to the attacks themselves. Even so, rescue was still possible, but it was derailed by a stand down order—possibly from President Obama himself. The talking points after the attack were deliberately twisted for political reasons. Dissenters who tried to tell us what really happened were harshly punished.

Is any of this true? The House Select Intelligence Committee—controlled by Republicans—has been investigating the Benghazi attacks in minute detail for two years. Today, with the midterm elections safely past, they issued their findings. Their exoneration of the White House was sweeping and nearly absolute. So sweeping that I want to quote directly from the report’s summary, rather than paraphrasing it. Here it is:

It’s hard to exaggerate just how remarkable this document is. It’s not that the committee found nothing to criticize. They did. The State Department facility in Benghazi had inadequate security. Some of the early intelligence after the attacks was inaccurate. The CIA should have given more weight to eyewitnesses on the ground.

But those are routine after-action critiques, ones that were fully acknowledged by the very first investigations. Beyond that, every single conspiracy theory—without exception—was conclusively debunked. There was no stand down order. The tactical response was both reasonable and effective under the circumstances. The CIA was not shipping arms from Libya to Syria. Both CIA and State received all military support that was available. The talking points after the attack were fashioned by the intelligence community, not the White House. Susan Rice followed these talking points in her Sunday show appearances, and where she was wrong, it was only because the intelligence community had made incorrect assessments. Nobody was punitively reassigned or polygraphed or otherwise intimidated to prevent them from testifying to Congress.

Read that list again. Late on a Friday afternoon, when it would get the least attention, a Republican-led committee finally admitted that every single Benghazi conspiracy theory was false. There are ways that the response to the attacks could have been improved, but that’s it. Nobody at the White House interfered. Nobody lied. Nobody prevented the truth from being told.

It was all just manufactured outrage from the beginning. But now the air is gone. There is no scandal, and there never was.