You might not expect someone who was diagnosed with cancer a few weeks ago to be feeling especially thankful right now. And it’s true that I’m not excited about either the cancer itself or the fairly miserable effects of the weekly chemotherapy that’s treating it. Nevertheless, this episode of my life has gotten me thinking about thankfulness, and it’s been on my mind for a while now. I know this is a little out of character, but allow me to share this with you in my usual bloggish way today.

The whole thing started on the evening of October 17th, when I sneezed hard and injured my back. On the morning of Saturday the 18th I couldn’t move enough to get out of bed. Here’s what happened next.

Marian called 911. Within ten minutes a troop of firefighters and paramedics were at our door. They hauled me downstairs on a stretcher, and ten minutes later I was in the emergency room. Over the next couple of hours I was tended to by an attentive staff of nurses and doctors. Blood was drawn, X-rays were taken, 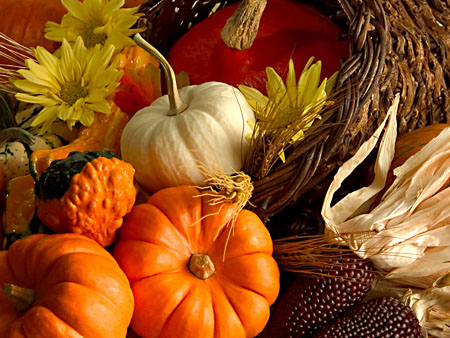 painkillers were administered. By a little after noon, a preliminary diagnosis of possible multiple myeloma had been made and I was admitted to the hospital.

The hospital was clean and efficient. My room was comfortable and private and had plenty of room for visitors. Over the course of the next few days, a rotating squadron of nurses took care of me. Biopsies were done. Medication was prescribed. A kyphoplasty was performed to stabilize my back. The myeloma diagnosis was confirmed on Thursday, and I was started on chemotherapy a few hours later. It was superb, unstinting care.

The day after I was released from the hospital, Marian and I went shopping and spent several thousand dollars on new furniture that my back could tolerate. A few days after that we got an enormous bill for the hospital stay, but it was nearly entirely paid for by insurance. The balance was something we could easily afford.

In short, everything that happened after that fateful sneeze has demonstrated just how lucky I am. I got immediate, skilled treatment. I have great health insurance. I have a good job and no money problems. I work at home and can set my own hours—and I even have a job I like so much it actually helps me weather the treatment. I work for editors who are completely understanding about what I’m going through and want only for me to recover. I have family and friends who care about me and are endlessly willing to help. And most of all, I have a wife who loves me and is always, always, always there for me.

There is nothing more I could want. I’m even thankful for the sneeze. It hurt like hell, but it’s the thing that got me to the hospital in the first place. Without it, I wouldn’t be recovering as I write this.

So sure: cancer sucks. But how many people who go through it have all this? Not many. Some have money problems. Some have work problems. Some are on their own. Some have lousy or nonexistent health insurance. Some get inadequate treatment. I have none of those problems. I am lucky almost beyond belief.

And one more thing: health care is suddenly a lot more real to me than ever before. Sure, I’ve always favored universal health care as a policy position. But now? It’s all I can do to wonder why anyone, no matter how principled their beliefs, would want to deny the kind of care I’ve gotten to even a single person. Not grudging, bare-bones care that’s an endless nightmare of stress and bill collectors. Decent, generous care that the richest country in the richest era in human history can easily afford.

Why wouldn’t you want that for everyone? It beggars the imagination.

In any case, that’s what I got—that and a lot more. And I am thankful for it. Happy Thanksgiving, everyone.