Like Mark Thompson, I’ve been a bit out of circulation for the past couple of weeks—enough to pay only minimal attention to Iraq, anyway—and also like Thompson, I’m a little surprised to come back and discover that Kobani is still holding out against ISIS. This is 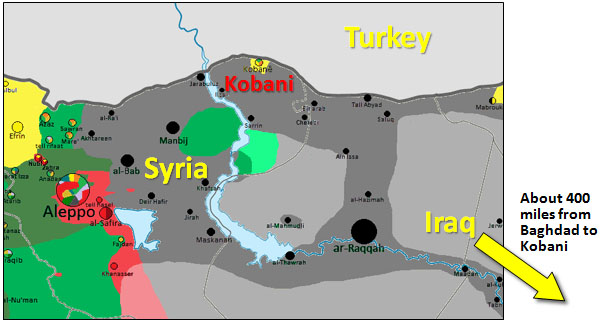 largely thanks to the US bombing campaign, and Thompson isn’t sure what to think of this success:

While that’s obviously good news in the short term for the city’s 200,000 largely-Kurdish residents, it’s tougher to handicap what it means for the long-term U.S.-led effort to “degrade and destroy” ISIS.

Earlier this month, U.S. military officers were speaking of ISIS’s “momentum,” and how its string of military successes over the past year meant that quickly halting its advance would likely prove difficult if not impossible. Yet, as far as Kobani is concerned, that seems to be what is taking place.

But that raises the stakes for the U.S. and its allies. Having smothered ISIS’s momentum, an eventual ISIS victory in the battle for Kobani would be a more devastating defeat for the U.S. military than an earlier collapse of the town.

There are concerns that the focus on saving Kobani is giving ISIS free reign elsewhere in its self-declared caliphate—that the U.S., in essence, could end up winning the battle while losing the war.

“The U.S. air campaign has turned into an unfocused mess,” Anthony Cordesman of the Center for Strategic and International Studies wrote Friday. “The U.S. has shifted limited air strike resources to focus on Syria and a militarily meaningless and isolated small Syrian Kurdish enclave at Kobani at the expense of supporting Iraqi forces in Anbar and intensifying the air campaign against other Islamic State targets in Syria.”

The flip side of this is the obvious one: have patience. “Here we are not three months into it and there are critics saying it’s falling apart; it’s failing; the strategy is not sound,” Rear Admiral John Kirby, the Pentagon spokesman, said Friday. “The strategy is sound and it’s working and there’s no plans to deviate it from right now.”

If we’re really engaged in a years-long battle against ISIS, then a few months here or there doesn’t matter much. And saving Kobani isn’t just a moral good, but can also demonstrate to others that ISIS is not some magical, unstoppable force destined to overrun Iraq. It’s just an ordinary group of guerrilla soldiers who can be defeated with determination and patience. Stay tuned.