On Saturday I promised to both agree and disagree with Matt Yglesias, but I never quite got around to the agreeing part. So let’s do that today. Yglesias was writing in response to a fairly typical complaint from Josh Green that President Obama is too aloof, too cerebral, and too technocratic to satisfy the public’s “emotional needs” in a national leader. But Yglesias points out that Obama’s firm, low-key disposition served him well when the rest of the world went into panic mode over the passage of Obamacare after Democrats lost control of the House in 2010:

There’s no single optimal temperament for all times and all places. Obama, by temperament, is a cool cucumber. I am not. At times, Obama might have been better served by a more emotional approach and an itchier trigger finger. 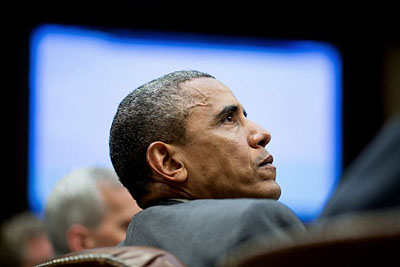 But Obama was right during the political crisis of January 2010.

He was also right back in October of 2008 when the American banking sector seemed to be collapsing….Obama’s opponent, John McCain, was never one to underreact. Most observers greatly appreciated the younger senator’s ability to keep things in perspective and his evident dedication to trying to learn the relevant facts….Similarly, two months earlier, McCain was proclaiming “we are all Georgians now” in response to Putin’s incursion into South Ossetia. A systematic overreactor would have had his finger much more on the public pulse when Ebola first arrived in Dallas. But he also might have embroiled the country in a nuclear war with Russia.

….Journalists have systematic professional incentives to overreact….The hot temperament consequently tends to dominate in the ranks of the media….But more than a political pose, an aversion to purely symbolic action has genuinely served Obama well at critical moments….Obama’s approach to the economy has been far from flawless, but it’s not a coincidence that the USA has performed better since 2008 than Europe or the United Kingdom and weathered its financial crisis far better than Japan did in the 1990s.

The Deepwater Horizon crisis passed. The American Ebola crisis will also pass. HealthCare.gov got fixed. The Russian economy is reeling in the face of sanctions. Osama bin Laden is dead. The economy is growing. Obama hasn’t always been a very effective pundit-in-chief (acute crisis moments aside, his inability to articulate public anger at Wall Street has been remarkable) but that’s not actually his job. On the big stuff, he’s been effective. And that’s not a coincidence.

I always find it difficult to strike just the right tone on this. Unlike Yglesias, I am a fairly cool cucumber, and I’m frankly relieved to have a president whose temperament is roughly in sync with my own. At the same time, I’m well aware that I’m not typical, and that like it or not, the presidency is a bully pulpit that often demands a certain demonstrativeness in order to resonate with the public. Overtly emotional appeals worked well for Bill Clinton and overtly nationalistic ones worked well for George Bush. In Obama’s case, however, it really is sometimes hard to tell if he’s truly engaged with problems the way he should be. Occasional leaks from White House insiders that Obama is “furious” about something or other doesn’t get the job done.

That said, Obama has good reason to be contemptuous of the 24/7 news cycle and the way it’s affected politics. Obviously reporters aren’t much interested in writing “Problem X continues to be steadily addressed” day after day. They want action! They want news! And these days, they don’t even want it daily. They pretty much want it hourly.

But that’s a crappy attitude toward problem solving. There have been times and places when Obama probably has been a little too disengaged, either in the planning process or in responding to crises. Healthcare.gov is an example of the former, and the sequester/debt limit/fiscal cliff battles may be examples of the latter. For the most part, though, his approach has been pretty sound. There was little the government could do about Deepwater Horizon, and high-profile interference probably would have been as counterproductive as the recent panic-stricken Ebola quarantine orders from the governors of New Jersey, New York, and Florida. Obama has instead been radiating calm and working behind the scenes to prevent Ebola from becoming just another partisan football. He’s urging us to adopt evidence-based responses that don’t undermine the longer-term fight against Ebola, and that’s the right call.

America is a big place. The world is even bigger. We have big problems that don’t get solved in a day. I don’t want to pretend that Obama has an ideal management style, when he plainly doesn’t. But given what he’s dealing with, Obama’s management style is pretty damn good. And you know what? The dirty little secret of management is that half the battle—maybe more!—is avoiding lots of stupid stuff that you have to clean up afterward.

Obama may not always give us the emotional sustenance we want, or mount a pretense of whirlwind action to satisfy the cable nets, but he gets things done. Anyone who can count on their fingers can pretty easily figure out, for example, that he’s had a more successful presidency than either Clinton or Bush. Slow and steady doesn’t win every race, but it wins a lot of them.