One of the most famous anecdotes from the Reagan years comes from Lesley Stahl, then a reporter for the CBS Evening News. After airing a long, critical piece during the 1984 campaign, she got a cheerful call from Dick Darman at the White House. “We really loved it,” he said. “Five minutes of free media.” Dan Schill tells the rest of the story:

Stahl asked, “Why are you so happy? Didn’t you hear what I said?” Giving the punch line of the parable, Darman said to Stahl, “You guys in Televisionland haven’t figured it out, have you? When the pictures are powerful and emotional, they override if not completely drown out the sound. I mean it, Lesley. Nobody heard you.”

Stahl said she examined her piece again, this time with the sound off, and found that the Reagan official was right—her story had accepted the Reagan frame and was practically an unpaid political commercial—a brilliant montage of Reagan surrounded with flags, children, balloons, and cheering supporters.

Asked if this experience changed the way she produces her stories, Stahl said, “Not really. I’m still trapped, because my pieces 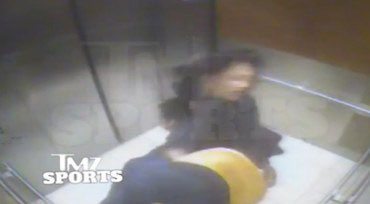 are written to the pictures we have.”

I was reminded of this story once again yesterday when TMZ released elevator video of Ray Rice slugging his then fiancée and knocking her unconscious. It was a brutal attack and reaction was swift and uncompromising. Rice was released by the Baltimore Ravens, the NFL suspended him indefinitely, and his sponsors began abandoning him almost immediately.

And yet, that video told us nothing. We already knew what had happened. Based on previous video, we knew that Rice had punched Janay Palmer hard enough to knock her out. We just didn’t have it on tape.

And it’s not only the NFL that reacted differently after the new video was released. Even the folks who criticized the league’s anemic response back in February are now far more outraged. The video affected everyone’s reaction.

Why? Is it the visceral effect of images? Does it have something to do with an instinct to avoid drawing the most damning conclusions until an image makes it impossible to evade the truth any longer? Or is it all a charade, and lots of people are just pretending to be more outraged because they know it’s now expected of them?

I don’t know. But the internet is now the domain of LOLcats, BuzzFeed listicles, and charts of the day—the latter for those of us who like images but also like to believe we’re too smart to be manipulated by them. The fastest growing social media sites are Instagram, Snapchat, Pinterest, and others like it. Blogs are often so stuffed with YouTube videos that you can refill your coffee cup while you wait for them to load. Millions of formerly peaceable people—people who already knew perfectly well that ISIS was a barbarous bunch of thugs—suddenly want to go to war because we now have pictures of that barbarism. Images rule everywhere. It’s not just Lesley Stahl who’s trapped in Lesley Stahl’s world anymore. We all are.