Here’s an interesting factoid: in 2008 we apparently reached Peak Menu. That year, the average menu contained 99.7 items. Then the housing bubble burst, we entered the Great Recession, and menus 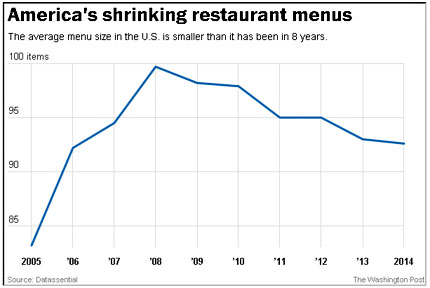 Why is this? Cost is one reason: it’s cheaper to support a smaller menu. But Roberto Ferdman writes that there’s more to it:

The biggest impetus for all the menu shrinking going on is likely tied to a change in the country’s food culture: Americans are becoming a bit more refined in their tastes.

“Historically, the size of menus grew significantly because there wasn’t the food culture there is today,” said [Maeve Webster, a senior director at Datassential]. “People weren’t nearly as focused on the food, or willing to go out of their way to eat specific foods.”

For that reason, as well as the fact that there were fewer restaurants then, there used to be a greater incentive for restaurants to serve as many food options as possible. That way, a customer could would choose a particular restaurant because it was near or convenient, rather than for a specific food craving (which probably wasn’t all that outlandish anyway). But now, given the increasing demand for quality over quantity, a growing appetite for exotic foods and a willingness to seek out specialized cuisines, Americans are more likely to judge a restaurant if its offerings aren’t specific enough.

“The rise of food culture, where consumers are both interested and willing to go to a restaurant that has the best Banh Mi sandwich, or the best burger, or the best trendy item of the moment, means that operators can now create much more focused menus,” said Webster. “It also means that the larger the menu, the more consumers might worry all those things aren’t going to be all that good.”

Hmmm. Let me say, based on precisely no evidence, that I find this unlikely. Have American tastes really gotten more refined since 2008? Color me skeptical. And even if American palates are more discriminating, are we seriously suggesting that this has affected the menu length at IHOP, Tony Roma’s, and Olive Garden—the three examples cited in the article? I hope this isn’t just my inner elitist showing, but I don’t normally associate those fine establishments with a “growing appetite for exotic foods and a willingness to seek out specialized cuisines.”

So, anyway, put me down firmly in the cost-cutting camp. Long menus got too expensive to support, and when the Great Recession hit, casual dining chains needed to cut costs. They did this by lopping off dishes that were either expensive to prep or not very popular or both. Occam’s Razor, my friends, Occam’s Razor.