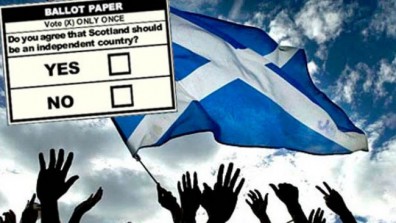 Scotland will be voting next week on whether to secede from Great Britain, and Paul Krugman is aghast:

Everything that has happened in Europe since 2009 or so has demonstrated that sharing a currency without sharing a government is very dangerous. In economics jargon, fiscal and banking integration are essential elements of an optimum currency area. And an independent Scotland using Britain’s pound would be in even worse shape than euro countries, which at least have some say in how the European Central Bank is run.

I find it mind-boggling that Scotland would consider going down this path after all that has happened in the last few years. If Scottish voters really believe that it’s safe to become a country without a currency, they have been badly misled.

I don’t get this either. I understand why the pro-independence forces favor continued use of the pound: it’s one less scary thing for the pro-union forces to use in their campaign. People are used to the pound, and it’s obviously a stable, well-accepted currency. Conversely, a new Scottish currency would be a big unknown, and give people one more reason to vote against independence.

It’s quite likely, of course, that the whole thing is a charade. The pro-independence forces probably feel like they need to support continued use of the pound for now, just to take it off the table as a campaign issue. But if independence succeeds, there’s a good chance that Scotland will adopt its own currency within a few years for all the reasons Krugman brings up. Being stuck in a currency union is so obviously dangerous that it will probably be abandoned once things shake down in an independent Scotland and the new government has time to focus on it.

As for Scottish independence itself, I don’t have much of an opinion. I do have a generic opinion that secession usually sounds better than it actually is in practice. Every province or state or city or neighborhood always thinks they have deep and justified grievances against whatever polity they belong to, and often they’re right. That’s the nature of large agglomerations of human beings. But often those grievances are, in truth, fairly skin deep—usually some version of “cultural identity,” the last refuge of the person with no actual arguments to make—and secession merely resolves some of them while creating whole new ones. I think it rarely accomplishes much.

My super-rough rule of thumb is this: I support secession of (a) territories that speak a different language, (b) territories that are physically distant, and (c) territories that have genuinely suffered at the hands of a brutal regime. Jokes aside on items (a) and (c), none of these really apply to Scotland, so I’d put myself down as moderately opposed to independence. But if it does happen, I sure hope currency union really does turn out to be a charade. If you’re going to have your own country, then you should have your own money and your own monetary policy. If we’ve learned nothing else over the past half decade, surely we’ve at least learned that.