NOTE: There’s, um, a pretty important update at the bottom of this post.

Following a string of links from an Atrios post, I came across this paragraph from a piece a few months ago about the possibility of Scottish independence:

As for Mr Salmond’s fantasies about oil revenues: stocks are dwindling, fracking is driving down the price, when territorial waters are drawn up he may find some of what he thinks is his oil in the North Sea will actually be England’s, and the Shetland Islands — in whose waters much of his reserves lie — say that if Scotland goes independent, they will seek to re-join Norway.

Wait. What? Rejoin Norway? Hasn’t it been quite a few centuries since they had anything to do with Norway? I clearly haven’t been paying enough attention to this stuff. What’s it all about? Here’s a piece from earlier this year:

David Cameron today summoned Norwegian Ambassador Hårek Hardbalne to Downing Street to demand that Norway makes clear it has no territorial interest in the Shetland Islands. This follows yesterday’s extraordinary announcement by the leader of Shetland Islands’ Council, Leif Erikson, that Shetland planned to hold a separate referendum on independence from Scotland should Scots choose independence from the UK on September 18th.

….In an interview with the BBC, ambassador Hardbalne said that he did not wish to comment on the surprise move by Shetland but wished to stress that Norway has always upheld the democratic rights to self determination. The BBC reported that the threat of sanctions and exclusion from NATO already had the Norwegians running scared.

That’s Dr. Leif Erikson, by the way. In any case, apparently the Shetland Islands really have been making noises about this. If Scotland secedes in order to grab a bigger share of North Sea oil wealth, then why shouldn’t they secede from Scotland? They have 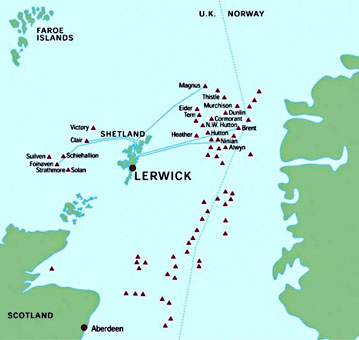 the same gripe about unfair division of oil revenues, after all. This is from 2012:

The Orkney and Shetland islands could remain part of the UK if the rest of Scotland votes to separate, according to a report submitted by their MSPs to the Government. The islands could even declare independence themselves, it adds.

Alternatively, they could agree to join a separate Scotland only if they are granted a much bigger portion of North Sea oil and gas revenues, around a quarter of which lies in Shetland’s waters alone. Tavish Scott, the Liberal Democrat MSP for Shetland, agreed the threat was political “dynamite” but questioned why Mr Salmond was the only politician who could use oil wealth to argue for self-determination.

This bit of soap opera is obviously old news to anyone who’s followed the Scottish independence movement closely, but that doesn’t happen to include me. In any case, it’s an amusing confirmation of my belief that no matter how small a political unit you have, there’s always a piece of it that’s richer than the rest and feels like it should no longer have to subsidize all the rest of the freeloaders. I wonder if the Shetland Islanders would be open to an invitation to join the state of California?

UPDATE: It appears that I’ve been taken in by an April Fools post regarding the whole Norway business. Leif Erikson is not the leader of the Shetland Islands council, and Hårek Hardbalne (aka Hagar the Horrible) is not the ambassador from Norway. So sorry. But in a way, being suckered into this joke somehow makes this whole post better, doesn’t it?

As for the rest of it, there doesn’t seem to be much to that either. There’s been some talk here and there about secession and/or rejoining the UK if Scotland votes for independence, but nothing very serious. Basically, I was pretty thoroughly snookered by all this.

UPDATE 2: If you’re interested, the Wall Street Journal has a more sober assessment of the Shetland Islands here. Bottom line for those too lazy to click: “People on this remote North Sea archipelago are following the Scottish independence campaign as intently as the rest of the U.K. Some even want another vote soon after—on their own independence from Scotland….To be sure, the breakaway campaign is a fringe one. ‘I don’t get a sense there is an appetite for full independence,’ said Malcolm Bell, a member of Shetland Island council.”