When we talk about Republican obstruction of judicial nominees in the Senate, the usual way is to look at filibusters and cloture votes. But that can sometimes be misleading, since cloture votes can happen for a variety of reasons. Or we can look at the raw number of seats filled. But that can be misleading too, since this can depend on how aggressive the president is about nominating new judges in the first place. A better way may be to simply look at how long nominees are delayed. That’s easier to measure, and long delays mostly happen for only one reason: because the minority party is blocking floor votes.

Via Jonathan Bernstein, the chart on the right comes from @Mansfield2016. It shows pretty clearly what’s happened to judicial nominees over the past couple of decades. 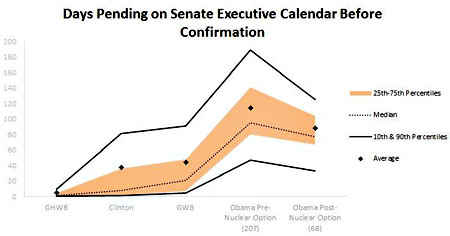 Under George HW Bush, nominees that made it to the Senate floor were voted on almost immediately. The majority Democrats waited only a few days to schedule a vote.

And then came Barack Obama. Once more delays spiked. Even after the rules were changed, delays have stayed high, averaging about 80 days. This is far higher than it was under Bush or Clinton. Bernstein comments:

I believe that Senate rules requiring super-majority cloture for judicial nominations are an excellent idea, provided the minority observes the Senate norm of using filibusters rarely. Unfortunately, Republicans simply haven’t abided by longstanding Senate norms. After Obama’s election, they suddenly insisted that every nomination required 60 votes — an unprecedented hurdle. They blockaded multiple nominations to the DC Circuit Court. They have, before and after filibuster reform, used Senate rules to delay even nominations that they have intended ultimately to support. Since reform, they have imposed the maximum delay on every single judicial nominee.

Ideally, I’d like to see a compromise that restores the minority’s ability to block selected judicial nominees. But right now, the more pressing concern is that if Republicans win a Senate majority in November, they may simply shut down all nominations for two full years. That would be absolutely outrageous. Yet it seems entirely plausible.

That final comment is what makes these numbers even more outrageous. It’s fairly normal for a minority party to start delaying nominees in the final year or two of an administration. Obviously they’re hoping to win the presidency soon and they want to leave as many seats open as possible for their guy to fill. This tends to inflate the average numbers for an administration.

But that hasn’t happened yet for Obama. His numbers for his first five years are far, far higher than Bush’s even though Bush’s are inflated by delays during his final year in office. It’s just another example of the fact that, no, both parties aren’t equally at fault for the current level of government dysfunction. Republicans greeted Obama’s inauguration with an active plan of maximal obstruction of everything he did, regardless of what it was or how necessary it might be in the face of an epic economic collapse. No other party in recent history has done that. It’s a new thing under the sun.