Jessica Wolpaw Reyes has a new paper out that investigates the link between childhood lead exposure—mostly via tailpipe emissions of leaded gasoline—and violent crime. Unsurprisingly, since her previous research has shown a strong link, she finds a strong link again. But she also finds something else: a strong link between lead and teen pregnancy.

This is not a brand new finding. Rick Nevin’s very first paper about lead and crime was actually about both crime and teen pregnancy, and he found strong correlations for both at the national level. Reyes, however, goes a step further. It turns out that different states adopted unleaded gasoline at different rates, which allows Reyes to conduct a natural experiment. If lead exposure really does cause higher rates of teen pregnancy, then you’d expect states with the lowest levels of leaded gasoline to also have the lowest levels of teen pregnancy 15 years 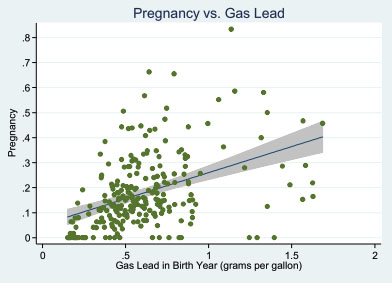 later. And guess what? They do. The chart on the right shows the correlation between gasoline lead exposure and later rates of teen pregnancy, and it’s very strong. Stronger even than the correlation with violent crime.

None of this should come as a surprise. The neurological basis for the lead-crime theory suggests that childhood lead exposure affects parts of the brain that have to do with judgment, impulse control, and executive functions. This means that lead exposure is likely to be associated not just with violent crime, but with juvenile misbehavior, drug use, teen pregnancy, and other risky behaviors. And that turns out to be the case. Reyes finds correlations with behavioral problems starting at a young age; teen pregnancy; and violent crime rates among older children.

It’s a funny thing. For years conservatives bemoaned the problem of risky and violent behavior among children and teens of the post-60s era, mostly blaming it on the breakdown of the family and a general decline in discipline. Liberals tended to take this less seriously, and in any case mostly blamed it on societal problems. In the end, though, it turned out that conservatives were right. It wasn’t just a bunch of oldsters complaining about the kids these days. Crime was up, drug use was up, and teen pregnancy was up. It was a genuine phenomenon and a genuine problem.

Most likely, there was a real problem, but it was a problem no one had a clue about. We were poisoning our children with a well-known neurotoxin, and this toxin lowered their IQs, made them into fidgety kids, wrecked their educations, and then turned them into juvenile delinquents, teen mothers, and violent criminals. When we got rid of the toxin, all of these problems magically started to decline.

This doesn’t mean that lead was 100 percent of the problem. There probably were other things going on too, and we can continue to argue about them. But the volume of the argument really ought to be lowered a lot. Maybe poverty makes a difference, maybe single parenting makes a difference, and maybe evolving societal attitudes toward child-rearing make a difference. But they probably don’t make nearly as much difference as we all thought. In the end, we’ve learned a valuable lesson: don’t poison your kids. That makes more difference than all the other stuff put together.