You wouldn’t normally expect Maine to be an epicenter of crackpottery, but ever since they elected tea party darling Paul LePage as their governor, things have been a little weird up north. Actually, more than a little. Over at TPM, they’re running an excerpt from Mike Tipping’s new book about LePage’s tenure, and it turns out that LePage has been surprisingly fascinated by the claims of a local “sovereign citizen” group called the Aroostook Watchmen, which claims that pretty much 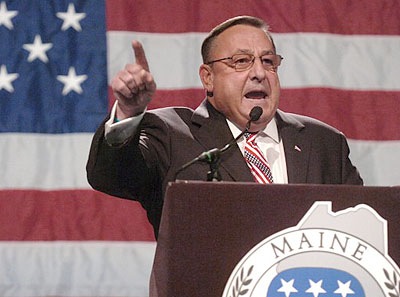 everything that both Maine and the United States are doing is blatantly illegal. To make their point, they submitted a set of “remonstrances” to a variety of Maine officials, including LePage:

The remonstrances the group submitted to LePage and the legislature accused Maine’s government of being unlawful, of having illegally accepted and used unconstitutional currency (anything other than gold and silver), and of coordinating with UNESCO, UNICEF, NATO, and the UN to deprive Americans of their property rights. An e-mail sent to the governor’s office by Constitutional Coalition spokesperson Phil Merletti, along with the remonstrance document, declared that legislators who had violated their oaths in this way were committing treason and domestic terrorism.

….LePage’s staff, including executive assistant Micki Muller, who reviews the governor’s e-mails, had previously shunted aside requests from Merletti to meet with LePage….This time, however, word of the remonstrances and the press conference made it past the executive office gatekeepers and to the attention of Governor LePage himself. Rather than ignoring the submission and its radical claims, LePage called Merletti at home at 9 a.m. the next morning in order to set up a meeting for that Saturday with members of the Constitutional Coalition. According to a note that Merletti sent to his e-mail list later that day and that was forwarded to LePage and members of his staff, the governor was angry that he hadn’t heard about the remonstrances earlier, and during the call he pledged to fire any staffers found to have been keeping the information from him.

….The Watchmen describe—and e-mails and documents obtained from LePage’s staff through Maine’s Freedom of Access laws confirm—at least eight meetings over a period of nine months in 2013, almost all more than an hour in duration and some lasting almost three hours.

During these regular meetings, according to the participants, the governor was “educated” by a series of “experts” brought in by the Constitutional Coalition on a number of their conspiracy theories. LePage also made a series of promises to the Watchmen that he would assist them in pressing their cases of treason against Eves and Alfond and in pursuing their wider antigovernment aims.

There’s much, much more at the link. If you want to read a case study of how someone can apparently go completely off the rails when he’s stuck inside a tea party bubble, this is for you.