Medicare has been a bastion of good news lately. Every year, the CBO reduces its baseline estimate of Medicare costs, which have dropped by more than $1,000 since 2010. 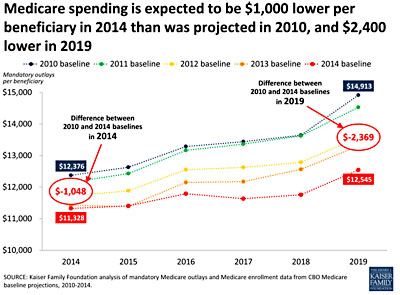 So what’s going on? Tricia Neuman and Juliette Cubanski of the Kaiser Family Foundation round up the evidence:

It is clear that the Medicare savings provisions in the ACA, such as reductions in provider payment updates and Medicare Advantage payments, have played a major role….In addition, the Budget Control Act of 2011 also exerted downward pressure on Medicare spending through sequestration that reduced payments to providers and plans by 2 percent beginning in 2013.  And yet even after incorporating these scheduled payment reductions in the baseline, CBO has continued to lower its projections of Medicare spending.

So what else might be going on here? In addition to scheduled reductions in Medicare’s more formulaic payment rates, providers may be tightening their belts and looking to deliver care more efficiently in response to financial incentives included in the ACA, and it is possible that these changes are having a bigger effect than expected. For example, CMS recently reported that hospital readmission rates dropped by 130,000 between January 2012 and August 2013. It is also possible that hospitals and other providers are using data and other analytic tools more successfully to track utilization and spending and to reduce excess costs. Another more straightforward factor is that several expensive and popular brand-name drugs have gone off patent in recent years, which has helped to keep Medicare drug spending in check.

No one knows for sure if these reductions are permanent, or whether high growth rates will reappear in the future. But even if the low growth rates of the past few years can’t be sustained, I suspect that Medicare growth will continue to be lower than anyone expected. There are two reasons for this. First, the growth rate of medical costs in general has been declining steadily for the past 30 years, and this has now been going on long enough that it’s highly unlikely to be a statistical blip. After a surge in the 80s and 90s, we really are returning to the growth rates that were common earlier in the century, and obviously this will affect Medicare.

Second, Obamacare really will have an impact. Not everything in it will work, but it includes a lot of different cost-cutting measures and some of them will turn out to be pretty effective. And who knows? If Republicans ever stop pouting over Obamacare, we might even be able to experiment with different kinds of cost reductions.

There’s a fair amount of year-to-year variability in health care inflation, and we should expect to have some years of high growth. But I’ll bet the average over the next decade is somewhere around 2 percent above the general inflation rate. That’s not too bad.