Iraq is close to being overthrown by a small Sunni insurgent force:

Sunni militants who overran the northern Iraqi city of Mosul as government forces crumbled in disarray extended their reach in a lightning advance on Wednesday, pressing south toward Baghdad….By late Wednesday there were unconfirmed reports that the Sunni militants, many aligned with the radical Islamic State of Iraq 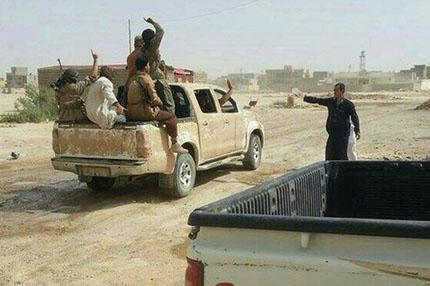 and Syria, were battling loyalist forces at the northern entrance to the city of Samarra, about 70 miles north of Baghdad.

So how did this happen?

Iraqi officials told the Guardian that two divisions of Iraqi soldiers — roughly 30,000 men — simply turned and ran in the face of the assault by an insurgent force of just 800 fighters. Isis extremists roamed freely on Wednesday through the streets of Mosul, openly surprised at the ease with which they took Iraq’s second largest city after three days of sporadic fighting.

Senior government officials in Baghdad were equally shocked, accusing the army of betrayal and claiming the sacking of the city was a strategic disaster that would imperil Iraq’s borders.

The developments seriously undermine US claims to have established a unified and competent military after more than a decade of training. The US invasion and occupation cost Washington close to a trillion dollars and the lives of more than 4,500 of its soldiers. It is also thought to have killed at least 100,000 Iraqis.

This is one of those Rorschach developments, where all of us are going to claim vindication for our previously-held points of view. The hawks will claim this is all the fault of President Obama, who was unable to negotiate a continuing presence of US troops after our withdrawal three years ago. Critics of the war will claim that this shows Iraq was never stable enough to defend regardless of the size of the residual American presence.

And sure enough, I’m going to play to type. I find it fantastical that anyone could read about what’s happening and continue to believe that a small US presence in Iraq could ever have been more than a Band-Aid. I mean, just read the report. Two divisions of Iraqi soldiers turned tail in the face of 800 insurgents. That’s what we got after a decade of American training. How can you possibly believe that another few years would have made more than a paper-thin difference? Like it or not, the plain fact is that Iraq is too fundamentally unstable to be rebuilt by American military force. We could put fingers in the dikes, but not much more.

Max Boot, of course, believes just the opposite, and I might as well just quote myself from a few weeks ago on that score:

I’m endlessly flummoxed by the attitude of guys like Boot. After ten years—ten years!—of postwar “peacekeeping” in Iraq, does he still seriously think that keeping a few thousand American advisors in Baghdad for yet another few years would have made a serious difference there? In Kosovo there was a peace to keep. It was fragile, sure, but it was there. In Iraq it wasn’t. The ethnic fault lines hadn’t changed a whit, and American influence over Nouri al-Maliki had shrunk to virtually nothing. We had spent a decade trying to change the fundamentals of Iraqi politics and we couldn’t do it. An endless succession of counterterrorism initiatives didn’t do it; hundreds of billions of dollars in civil aid didn’t do it; and despite some mythologizing to the contrary, the surge didn’t do it either. The truth is that we couldn’t even make a dent. What sort of grand delusion would persuade anyone that yet another decade might do the trick?

If we committed US troops to every major trouble spot in the Mideast, we’d have troops in Libya, Lebanon, Syria, Afghanistan, and Iraq. Lots of troops. The hawks won’t admit this outright, but that’s what their rhetoric implies. They simply refuse to believe the obvious: that America doesn’t have that much leverage over what’s happening in the region. Small commitments of trainers and arms won’t make more than a speck of difference. Big commitments are unsustainable. And the US military still doesn’t know how to successfully fight a counterinsurgency. (That’s no knock on the Pentagon, really. No one else knows how to fight a counterinsurgency either.)

This is painfully hard for Americans to accept, but sometimes you can’t just send in the Marines. Iraq may not have been Vietnam 2.0, but there was certainly one similarity: military success against an insurgent force has a chance of succeeding only if we’re partnered with a stable, competent, popular, legitimate national government. We didn’t have that in Vietnam, and that made victory impossible. We don’t have it anywhere in the Mideast either. For better or worse, the opposing sides there are going to have to fight things out on their own. This isn’t cynicism or fatalism. It’s just reality.