Iraq’s civil war may be a humanitarian crisis for most Iraqis, but for the Kurds in northern Iraq it represents an opportunity:

By every measure, the Sunni militants’ lightning advance through Mosul and on south toward Baghdad has been a disaster for Iraq. But it raises possibilities, many of them good ones, for the Kurds, who already have a great deal of autonomy in the north. If they can defend their borders and not get dragged into a bloody stalemate between the Iraqi Army, along with its Shiite militia allies, and the Sunni militants, the Kurds could emerge empowered, even, perhaps, with their centuries-old dream of their own state fulfilled.

As the Sunni militants seek to erase the border between Iraq and Syria that the colonial powers drew after World War I, the Kurds want to draw a new one, around a stretch of territory across northern Iraq. The ultimate 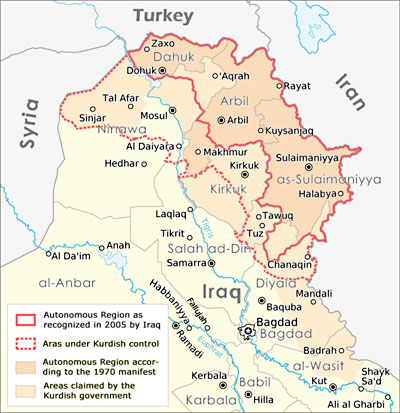 goal is even more ambitious: to unite the Kurdish minorities from four countries — Syria, Iraq, Turkey and Iran.

Jonathan Dworkin, an infectious diseases doctor who has written about Kurdistan for me at the Washington Monthly blog in 2006 and then again here at MoJo in 2011, believes that the dream of a multi-ethnic Iraq is at the root of our failure there:

A more creative American policy would acknowledge the reality of what the Kurds have built, which is a prosperous and peaceful nation state in the mountains of Northern Iraq. It’s a nation whose soldiers and diplomats worked amicably alongside Americans through all the darkest episodes of the Iraq wars. It’s a nation where not a single American soldier died during ten years of bloody military involvement in Iraq, despite occasional terrorist attacks.

….The usual criticism of the view that Iraqis would be better off apart is that the regional neighbors would never allow it. In the case of the Kurds, that basically means Turkey. But the situation between Kurds and Turks has changed a lot in recent years. Last year a pipeline was completed that will allow Kurds to export oil directly to Turkey, bypassing Baghdad and greatly enhancing their economic independence. As one Turkish official involved in the oil deal recently put it in a Washington Post article on the topic, when it comes to Kurdish independence, Turkey “has bought that option.” No doubt many in Turkey would prefer the status quo to an independent Kurdistan, but the economic boom in Sulaimania and Erbil is evidence itself that money is trumping ideology in Turkey.

There are practical benefits as well to an independent Kurdish state. Kurdistan would provide America with one good ally, rather than a series of fake ones. The Kurds already field a tough and self-motivated defense force to counter terrorist threats from neighboring parts of Iraq, and unlike our allies in the Persian Gulf, they have been a consistent enemy of Al Qaeda in all its varied permutations. Their government would provide useful intelligence and a quiet diplomatic channel to Iran. Importantly, they would free us from the absurdity of supporting yet another Arab dictatorship. Maliki would become Iran’s problem, which is appropriate, as he is largely their creation.

Back in the day, Joe Biden was a proponent of creating a loosely federal Iraq, with Kurdish, Sunni, and Shiite states that had considerable freedom from central control in Baghdad. There were, and still are, a lot of problems with that idea, but an independent Kurdistan would be the easiest first step. For all practical purposes, Kurdistan has been operating independently for years; it’s stable and prosperous; it has a working army; and it’s strongly pro-American. Figuring out the borders would be a challenge, but not an impossible one. If it’s really true that Turkey wouldn’t go ballistic over the prospect (out of fear that it would cause internal problems with its own Kurdish population), it’s a prospect worth considering. And Karl Vick of Time reports that it really is true:

The transformation of Turkey from enemy to key ally of Iraqi Kurdistan is almost complete, removing a key obstacle to the dismemberment of Iraq as Sunni Muslim extremists gain territory in a nation ruled by a sectarian Shiite Muslim government.

“It’s a fact that the autonomous Kurdish region of Iraq is the best ally of Turkey in the Middle East,” says Dogu Ergil, a political science professor at Istanbul’s Fatih University who specializes in what Turks call “the Kurdish question.” “Once it was a formidable potential enemy, because Turkey feared a basically independent Iraqi Kurdistan would be an attraction center for the Kurds of Turkey. But it proved that it’s not so, and Iraqi Kurds could be the best economic partners of Turkey.”

Perhaps an independent Kurdistan is a more realistic possibility than most of us think.