Earlier this week, Republicans killed a carefully crafted, bipartisan energy bill that was three years in the making. Ostensibly, this was done in protest against Harry Reid’s refusal to allow votes on additional amendments, an issue that’s been a longtime grievance for the GOP. But that wasn’t the real problem. After all, everyone knows that delicately constructed bills like this one need to be passed on an all-or-nothing basis once a majority coalition has been painstakingly assembled. What’s more, the Republican amendments were all on tangential hobbyhorses (Keystone XL, EPA power plant regs, etc.) that were designed solely as election-year rube bait anyway.

No, it turns out that the bill was killed because Scott Brown, who’s running for a Senate seat in New Hampshire against Jeanne Shaheen, asked Mitch McConnell to kill it. Jon Chait tells the story:

Brown is running against Shaheen this November, and Republicans — especially would-be Majority leader Mitch McConnell — want Brown to beat Shaheen because they want to win a majority.

Brown needs to deprive Shaheen of the afterglow that would come from shepherding a (now rare) bipartisan bill through Congress….For a voter paying close attention to the Senate’s machinations, this makes little sense: Republicans are arguing that their torpedoing of Shaheen’s bill proves Shaheen is a legislative failure. 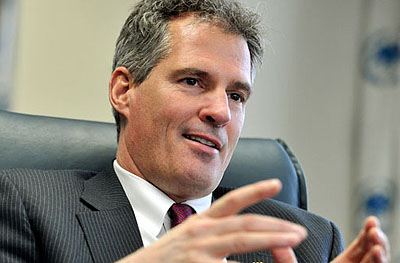 But few voters follow politics so closely, and even those reading detailed coverage of the bill’s failure would quickly get lost in an arcane procedural dispute that putatively caused its demise.

….You can call this cynical, but McConnell is actually doing what we expect our politicians to do.…McConnell has not merely outmaneuvered other politicians in his strategic acumen, he has likewise surpassed the whole Washington Establishment. The near-total absence of bipartisanship has not escaped anybody’s notice — it is the subject of frequent and even obsessive commentary. The failure of the parties to find agreement is routinely attributed to a series of tactical or communications missteps or the decline of the Georgetown dinner party scene or other variations of magical thinking. It is unable to grasp the underlying strategic incentives of two parties.

It’s all fairly remarkable. McConnell has correctly grasped that if you sabotage the government, most voters won’t really know how or why it happened. They’ll just know that things are a mess and they’ll get peevish about it. And when they look around for someone to blame, it will be the party in power.

In a sense, you can’t blame McConnell for this. It’s a keen insight, and he’s just using it to play political hardball. And you can’t really blame the voters. Most people are simply never going to have a deep interest in Beltway political minutiae.

So who can we blame? How about the press? Its fanatical devotion to the proposition that both parties are always equally to blame for everything is one of the reasons voters never figure out what’s really going on. If, instead, the press were more devoted to explaining objective reality, maybe the electorate would have a fighting chance of understanding things. And Mitch McConnell would no longer be able to count on the public staying ignorant of why things are always such a mess.