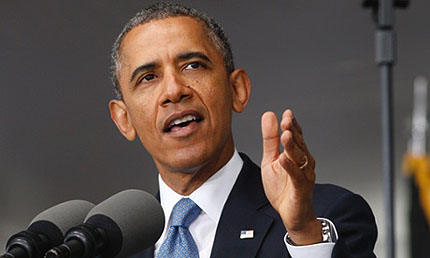 To say that we have an interest in pursuing peace and freedom beyond our borders is not to say that every problem has a military solution. Since World War II, some of our most costly mistakes came not from our restraint but from our willingness to rush into military adventures without thinking through the consequences, without building international support and legitimacy for our action, without leveling with the American people about the sacrifices required. Tough talk often draws headlines, but war rarely conforms to slogans. As General Eisenhower, someone with hard-earned knowledge on this subject, said at this ceremony in 1947, “War is mankind’s most tragic and stupid folly; to seek or advise its deliberate provocation is a black crime against all men.”

….America must always lead on the world stage. If we don’t, no one else will. The military that you have joined is, and always will be, the backbone of that leadership. But U.S. military action cannot be the only, or even primary, component of our leadership in every instance. Just because we have the best hammer does not mean that every problem is a nail.

It’s nice to hear Obama say this so directly. Oh, the usual suspects will howl, but no one who has paid even the slightest attention to the history of the past 50 or 60 years can really question this. Our world isn’t yet beyond the need for war, but for war to be an effective instrument of policy it needs to be used judiciously. It needs to be used when core interests are at stake and, equally importantly, it needs to be used only when it’s likely to succeed on its own terms. If we don’t know how to win, or if we have unrealistic ideas of what it even means to win—both of which were the case in Afghanistan and Iraq—then we shouldn’t fight. This isn’t a matter of deep foreign policy thinking, it’s just common sense. Like it or not, there are lots of problems in the world that US military force can’t solve.

On another note, I was intrigued, toward the end of Obama’s speech, at the parts that got applause from the West Point cadets. Here’s a sample:

Having other nations maintain order in their own neighborhoods lessens the need for us to put our own troops in harm’s way. It’s a smart investment. It’s the right way to lead. (Applause.)….What makes us exceptional is not our ability to flout international norms and the rule of law; it is our willingness to affirm them through our actions. (Applause.)

The cadets were applauding multinational engagements, international law, closing Guantanamo, cutting down on the surveillance state, and the use of soft power. I confess that I wouldn’t have guessed that these points would get the strongest response from an audience of West Point graduates. But I’m not sure if that says more about them or me.

David Corn has some more thoughts about Obama’s speech here, and Max Fisher has a pretty good rundown here of both the benefits and the pitfalls of Obama’s approach. I think he goes too far when he describes it as a “superdove foreign policy doctrine,” but his criticisms are worth reading anyway.