Being a blowhard has worked well for Chris Christie at home, so it’s no surprise that he endorses blowhardism as a foreign policy too. In a speech on Sunday, he assured everyone that a Christie administration would….would…..well, something:

In Sunday’s speech, with rhetoric reminiscent of President Bush’s first speeches after 9/11, the governor made a moralistic case for clearly distinguishing between “good” allies and “evil” enemies.

….Though Christie offered few specifics, he particularly trashed Obama’s policies on Russia, Syria, and Iran. “We see Russian activism once again rearing its head in the world, we see an America that backed away from a commitment made by the president of the United States in Syria, we see a country, our country, permitting even a thought of a terrorist state like Iran having nuclear capability,” he said. “Here’s something that should not be up for debate, that once you draw that red line, 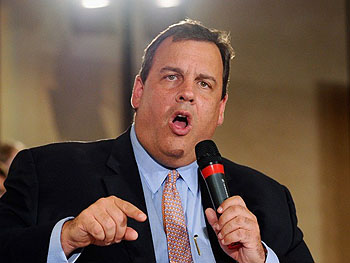 you enforce it — because if you don’t, America’s credibility will be at stake and will be at risk all over the world.”

There should be a constitutional amendment or something banning speeches like this unless you’re willing to explain, in some detail, exactly what you would have done instead. Cut and run, like Christie’s hero Ronald Reagan did in Beirut? Lie your way into a disastrous war like his hero George Bush did? Or what? I’m really tired of hearing nonsense about how we should have “supported” one side or another in Egypt or Syria or Ukraine. Or how we should have sent heavy arms over, even though no one was trained to use them and in some cases we didn’t even have anyone reliable to send them to. Or that somehow just giving another “evil empire” speech would have sent the mullahs screaming into the night.

We didn’t win the Cold War because Reagan gave some speeches. We won because of low oil prices, a foolish war in Afghanistan, poor harvests, and the effective bankruptcy of the Soviet Union. We’re not going to win any of these other conflicts with bluster either. So let’s hear it. Is Christie planning a military strike against Iran? Troops on the ground in Syria? Cruise missile strikes against Russian troops massed on the Ukrainian border? If Christie doesn’t have the guts to say this stuff outright, he should keep his bluster to himself. Without specifics, this is just laughable schoolyard bravado.