Why are there more moderate Democrats than moderate Republicans? This has never been because Democrats are spineless wimps who won’t stand up for liberal values. The main reason is simple: there aren’t very many self-identified liberals in America. There never have been. Self-IDed conservatives have outnumbered self-IDed liberals by 10-15 percentage points for decades. This means that Democrats are forced to appeal more to the center than Republicans are.

But Gallup reports that this is changing. On social issues, the ID gap has narrowed to nearly zero. On economic issues conservatives still have a healthy 21 percentage point lead, but that’s way down from 2010. Here’s the chart: 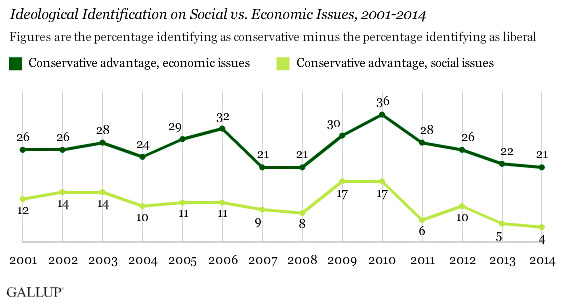 In one sense, you should take this with a grain of salt. Sure, there are now more self-IDed liberals, but that’s compared to 2010, a high-water mark for conservative identification.

In another sense, this is pretty unusual. Normally, the country gets steadily more liberal during Republican presidencies and steadily more conservative during Democratic presidencies. This is, presumably, because voters get increasingly tired of whoever’s in power and more open to the idea that the other guys might have better answers. But this time that hasn’t happened. There’s too much noise in the Gallup chart to draw any definitive conclusions, but if you compare the numbers now to the average from the last few years of the Bush presidency, the country has actually gotten a bit more liberal. That’s something that rarely happens six years into a Democratic presidency.

The trend is more noticeable on social issues, which shouldn’t surprise anyone. On gay rights in particular, the country has plainly moved in the direction of more tolerance, and conservatives are just flatly out of step. As this trend continues—and it’s inexorable at this point—the conservative position strikes more and more people as not merely misguided, but just plain ugly. And you don’t self-ID with an ideology that you think is ugly.

It’s a funny thing. People say they don’t like President Obama’s foreign policy, but it turns out they approve of the specific things he’s doing. They say they don’t like Obamacare, but they like the things Obamacare does. They say they don’t like Obama’s economic policy, but they largely approve of his actual positions. You see this over and over. It doesn’t look like Obama is doing much to move the country in a more liberal direction, but in his slow, methodical, pragmatic way, he’s doing just that. A lot of people might not know it, but they’re attracted by his no-drama approach to incremental social change. It frustrates those of us who want to see things change faster, but in the end, it might turn out to be pretty effective.